Top 20 Performances from the 2017 Giro d’Italia

Here’s my list – in reverse order – of the top 20 performances from this year’s Giro d’Italia. Whilst the riders from the top of the GC feature throughout, they won’t necessarily be ranked by their finishing position. My list picks out overachievers, eye-catchers and surprise packages, as well this year’s heroic support riders. 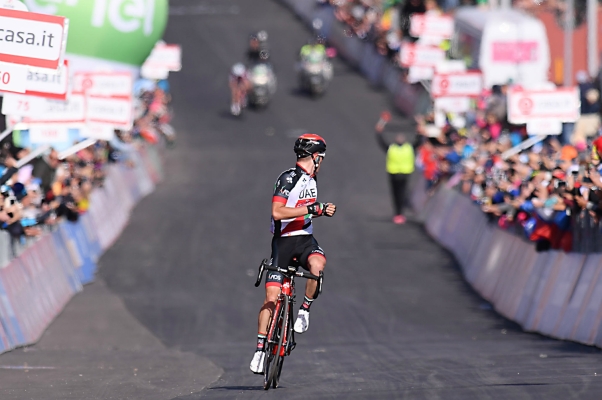 Vincenzo Nibali’s support on the hardest summits would fluctuate between thin and almost non-existent. The exception was Pellizotti who would frequently head the GC group with strong tempos and long turns. A distant 12th in the 2014 race, Pellizotti was largely anonymous in his last two years with Androni but proved to be an inspired signing by Bahrain. Perhaps only Winner Anacona set more tempos than the 39-year old Italian.

Remember the first week? What about the very first stage? When Bora Hansgrohe moved to the front of the peloton Lucas Postlberger drifted away and after a few fast corners he had a clear gap. Never the plan A, Postlberger would have heard encouragement on team radio as his gap grew. A stage win and the Maglia Rosa followed and the Austrian was one of the strongest riders in the first week. 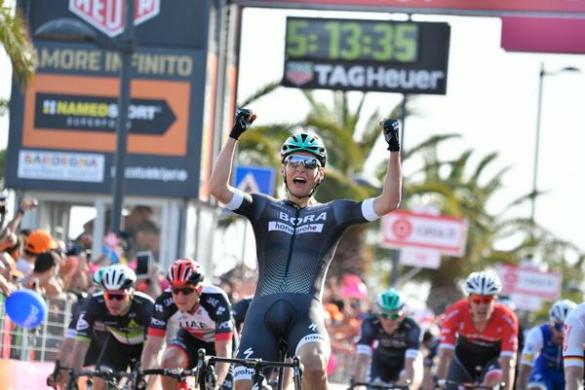 A tricky one now. Tejay van Garderen started the Giro as a GC contender but after a substandard (yet predictable) spell in the mountains his podium hopes were over. The BMC rider can’t hold it together anymore but showed a different side to his character when joining a breakaway on Stage 18. He followed Mikel Landa into a successful two rider escape in the Dolomites before proving the more astute sprinter. It was an emotional first Grand Tour stage win.

A good but ultimately unsuccessful Giro for Luis Leon Sanchez; a stage top five and the runners-up spot in the KotM competition don’t really do him justice. He was part of a fab four (Lulu, Rui, Omar and Pierre – in my opinion a future boy band) that attacked on multiple occasions but was unable to cross the line first. He was a man on a mission and delivered the sort of performance that Astana needed to get through their difficult Giro.

When all is said and done, back-to-back top tens at the Vuelta and Giro is a great achievement for Davide Formolo. I’m a huge fan and it was exciting to see the young Cannondale climber mix it with the big names for so much of the race. He displayed vastly improved tactical nous but tired in the final week and can count himself lucky to have inherited tenth from a sick Steven Kruisjwijk. Formolo still can’t time trial; a factor which could hinder Ivan Basso’s prediction that he will win the Giro within three years…

Sebastian Reichenbach was the domestique of the race. In the final week the Swiss climber came into his own and was successful in turning FDJ into a threat alongside Thibaut Pinot. He chased down plenty of attacks for his team captain and was responsible for bringing the Frenchman back up to the leaders on Stage 20.

Another Grand Tour and yet another top ten finish for Bauke Mollema. There’s not much more to say that you won’t already know. He deserves credit for his solid performances and he’s shown on multiple occasions that he can mix it with the very best. Nevertheless, it’s hard to imagine the others were particularly scared of the grinding Dutchman. Perhaps Trek should give him a stronger team?

A relatively low appearance in this list for a man who was flying in the last three mountain stages. Two bad time trials have cost him a podium; I never expected this to be the case. I was critical of Pinot on Twitter but he did look good in the final week. He can clearly go deep into a Grand Tour as showcased by his attack on Pontives. Second best to Quintana on Blockhaus, Pinot has plenty of reasons to be cheerful buried somewhere in his mixed bag of a performance.

Pierre Rolland is back (possibly). This was the Rolland we all want to see. Fourth place at the Giro in 2014 put a favourable spin on his GC potential. Since being set free from Tommy Voecklar’s bodyguard duties and winning atop Alpe d’Huez in 2011, Rolland has looked his happiest going for long range breaks and punishing anybody who dared stay with him in the closing stages. That’s what he did on Stage 17 albeit on a surprisingly gentle finale.

Jan Polanc’s solo ride up Mt.Etna was a thing of a breakaway beauty. He cruised up the opening slopes, held a strong gap through the middle, and absolutely peddled squares at the top. It was also remarkably reminiscent of the feat he pulled off at Abetone two years previous. However, the best thing about Polanc’s Giro was the way he used Etna as a springboard for an 11th place finish. It looked briefly like he was making a siege on the best young rider’s jersey.

When you’re odds on favourite for the Giro d’Italia and gap your rivals on the second summit finish you must feel relieved. Quintana took 24 seconds plus a stage bonus on Blockhaus and it could/should have been more. The next day he lost his lead emphatically and the pressure was piled back on. The rest of Quintana’s race, like his attack Blockhaus, lacked a certain edge. Despite this, he came second and never looked in serious danger of losing his podium spot.

Last year’s champion rode another strong Giro d’Italia. Admittedly he finished nine seconds behind Quintana but he seemed to have a better approach to the race. He stayed in his saddle for much of his defensive ride up Blockhaus but a strong time trial marked the start of his surge. In the final week he was daring, brash and aggressive (both on and off the bike). It must be strange being Vincenzo Nibali; I still don’t think he gets the credit he deserves. Nevertheless, he wasn’t able to seize the Maglia Rosa no matter what cunning plan he hatched.

Imagine pedalling your legs into the ground every day only to find out the cycling world has condemned you as ‘weak’. That was the situation Tom Dumoulin’s teammates would find themselves in every night. Yes, in comparison to Movistar, Sunweb lacked mountain strength once Wilco Kelderman abandoned but on several occasions Dumoulin was left isolated in the same kilometre as plenty of his rivals. Beers are in order for Georg Preidler, Chad Haga, Sindre Lunke, Tom Stamsnijder, Phil Bauhaus and Simon Geschke but one man deserves a share of the trophy; Laurens ten Dam. The aging Dutchman rode himself into the Italian asphalt for Dumoulin and was by his side during several difficult moments. It was one of my favourite Giro performances.

Pocket-sized Pozzovivo has just ridden his best Giro d’Italia. Despite finishing one place higher in 2014, this Giro saw Pozzovivo deliver one of his best ever climbing performances. He was no longer the background rider we saw twelve months ago and frequently bridged across to the big attacks. Pozzovivo finished four minutes behind Dumoulin but lost over five in the two time trials. Against the clock he looked uncomfortable and appeared to be at war with his gears.

Ilnur Zakarin is now a bona fide Grand Tour contender. He was the strongest rider on the final mountain stage and his team worked hard to set up multiple attacks. He was one of a handful of riders that proved Quintana and Nibali were not a class apart when it came to double digit gradients. We saw plenty of Zakarin’s distinctive style (head cocked, shoulders rocking) at this year’s Giro.

Last year I put Bob Jungels at the top of my list after his sensational breakthrough ride. It was a big ask to reach the same heights in 2017 but the Quick-Step captain delivered a performance of similar proportions. There was another spell in pink, more grinning on the podium, a successful retention of the young rider’s jersey and this time a maiden Grand Tour stage victory. He was strong in the final few days keeping tabs on his resurgent rival Adam Yates. A huge talent.

Perhaps Jan Hirt should be a few places lower in this list but I’m allowed to show some bias. I remember the Czech on the Solden climb at the Tour de Suisse delivering the strangest of rides; he was 17 minutes down but fighting hard to stay with a very elite group of favourites. I’d never have thought two years later he’d be one of the strongest riders at the Giro d’Italia. Caught between hunting a stage and defending his position, Hirt was the only CCC Sprandi Polkowice rider to do anything of note. A remarkable 12th place finish should earn him a move.

Mikel Landa turned a Giro to forget into a Giro to remember perfectly illustrating the merits of finishing a stage no matter how bad you feel. Wrecked by the moto crash, Landa’s GC hopes plunged to impossible after rolling home 165th on Blockhaus. By the final week he had fully recovered and unleashed his breakaway beast to finish 3rd, 2nd, 2nd and 1st in four consecutive mountain stages. It was a thoroughly enjoyable performance showcasing undeniably strong form. The KotM jersey was simply a matter of course. We also learnt he should never leadout a sprint.

This Giro d’Italia was very much a race in two parts and before the GC battle burst into life we were treated to a number of hot sprints. We can crown Fernando Gaviria the undisputed king after he surged to four stage victories, hammered everybody in the points competition and looked a level above his rivals. He started slowly in Sardinia and was pipped once by Caleb Ewan but this Giro marked the start of the Gaviria era.

The rider of the race was the winner of the race. A relative outsider at the start of the year, Dumoulin seized on the many time trial kilometres to take his maiden Grand Tour. To say he won the race on the time trials would be mathematically accurate but a major injustice. He was sixth on Etna, third on Blockhaus and powered past everybody on the Oropa summit. There was also a superb recovery ride up the Umbrail pass, a flying descent into Bormio, a high stakes game of chicken on Pontives and a crucial chase up the slopes of Foza. I haven’t even mentioned the expectation he carried on broad shoulders, his cool head under pressure, his bad stomach in the Alps or his bad blood with the big boys. It was a truly magnificent Giro d’Italia victory.