Yesterday Chris Froome won his second Tour de France becoming the 20th rider in history to take more than one title. The race leader since Stage 7, Froome was rarely troubled until things took a difficult turn when the race reached the Alps. The only man with any chance was Nairo Quintana and his measured attacks on the Brit- saved for the final two mountain stages- saw chunks of Froome’s lead fall away. A stage win eluded the Colombian runner-up, with last year’s heroes Vincenzo Nibali, Romain Bardet and Thibaut Pinot feasting on the Alpine summits in the final week. 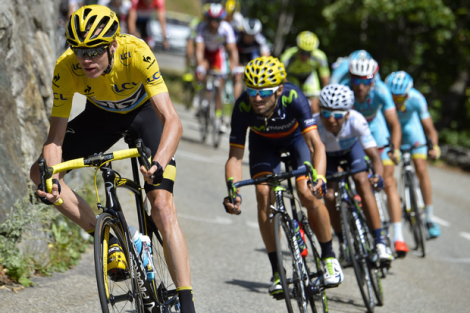 Quintana the real King of the Mountains

The leading pair in the GC were also the top 2 in the King of the Mountains competition, Froome outscoring Quintana 119-108 and Romain Bardet settling for third. The jersey was really a consequence of Froome’s strength over the three weeks and it was a shame to see it won as an after-thought. However, with double points available for each summit finish the competition was always going to be won by one of the leading riders, and best climbers, in the race. The likes of Bardet and Joaquim Rodriguez endeavoured to collect breakaway points but the system favoured the giant mountain finishes of the race. Froome is a deserving winner with only Quintana a worthy challenger for the crown. The Colombian dominated the Alpine stages and if times were taken for the mountains only he would be the winner of the Tour de France. He lost the race by 1 minute 12 but was over 90 seconds adrift after losses in the crosswinds on the first road stage to Zelande.

If Quintana had claimed the King of the Mountains title, the jersey wearers would have exactly mirrored the 2013 edition of the race; Froome in yellow, Sagan in green and Quintana in both polka dots and the white of the young rider’s classification. The similarities continue with six German stage wins including the Champs Elysees, two Spanish riders in the top 5, a win for a Frenchman on Alpe d’Huez, a top 10 for Bauke Mollema and Romain Bardet the best place French rider. Svein Tuft, who came last in 2013, came one place away from doing so again this year.

Nibali gets his victory, finishes fourth

Vincenzo Nibali had a torrid time on La-Pierre Saint Martin and, alongside the rest of his dreary campaign, appeared a ghost of his former self. He began to stretch his legs at the end of the second week before celebrating a wonderful win on La Toussuire. His languid riding made way for a confident and aggressive approach and he stormed away from the peloton to catch, and pass, Pierre Rolland and take a stage win that took him within sight of a podium finish. His win was almost tainted by the fact he seemed to eyeball Chris Froome having a mechanical before immediately attacking. He says this was not the case- though this seems improbable- providing an almost Mafioso ‘it’s his word against mine’ defence. However, Nibali was not attacking the race leader directly and more likely made a split second decision to launch his pre-planned attack as the drama unfolded (Froome himself is no stranger to ill-timed attacks on La Toussuire). What-goes-around-comes-around and Nibali suffered a bike change the following day at the bottom of Alpe d’Huez and lost vital ground. His ascent of the Alpe was arguably his most impressive of the race, recovering to ride through broken riders and finishing amongst his rivals.

Bardet and Pinot end Tour on a high

There were also stage wins for Romain Bardet and Thibaut Pinot as the pair turned their races around in the final week. Bardet was particularly successful and added a win on the fantastic Stage 18 to his two third places. What was most impressive was his ability to ride with the leaders in between efforts in the break, rather than yo-yoing from day to day. He saw himself move up in the GC and eventually finish 9th. Pinot looked to be on to a loser in his pursuit of a stage win before everything clicked on Alpe d’Huez. Reaching team-mate Alexander Geniez for some brief support, Pinot kicked on and held off a dancing Quintana by 18 seconds.

Geraint Thomas falls away from the top 10

Geraint Thomas finally cracked on Stage 19 and did so in spectacular fashion. In the Pyrenees Thomas had become a genuine top 5 contender (if not podium) and his fall in the standings eventually came as a shock. He looked twice the rider of Nibali at times during the race but rode home 22 minutes behind the Sicilian when suffering two days from Paris. He landed 15th in the GC after that stage and remained there the next day despite finishing a further five minutes off the pace on Alpe d’Huez. This was still a successful race for the Welshman and a dose of reality does not change the opinion that Thomas is a very special rider.

Much like Mark Cavendish and Marcel Kittel before him, Greipel dominated the sprints and claimed four on offer including the finale in Paris. Anybody who’s seen the size of Greipel’s legs will not be surprised by his feats but it is curious that his time as top dog has arrived at the age of 33. Perhaps without recognition, he has won at least one stage of the Tour in its last five editions but has recently been outclassed by compatriot Kittel and was frequently beaten by ex-teammate Cavendish in the early part of the decade. This year, Griepel and Lotto-Soudal got it right.

First was everything for anonymous Contador

Alberto Contador finished 5th in this year’s race in a failed attempt to complete a Giro-Tour double. This is the same fate he met in 2011 when attempting the double and it continues a run of mediocre performances at the Tour de France. Contador so often leaves his rivals behind but has recently struggled to deliver a trademark victory on French slopes. Nevertheless, it was refreshing to see Contador attempt moves so early on in stages. He knew no time could be gained in the final 2km of a stage and so rode away from Froome, to no avail, over 50km (and at one point 100km) from the finish line. He was also unbothered with the podium battle at the back end of the race- he only had eyes for the win.

A handful of other riders were also completing a Giro-Tour double with Steven Kruijswijk and Tanel Kangert experiencing good results. Both narrowly missed out on double top 20’s with Dutchman Kruijswijk adding a 21st to his entertaining Giro 7th and Kangert placing 22nd after his Giro 13th despite riding as a domestique in both races. Simon Geschke finished both in good form and can add a Tour stage win to his Giro podium plus a further top 5 in each race. Ryder Hesjedal animated the Giro and was at it again on Alpe d’Huez, claiming a brilliant third.

Mathias Frank finished 9th for Switzerland and IAM Cycling in one of the surprises of the race. A reasonable Pyrenees had left him just outside the top 10 before he clawed back a sizeable chunk of time as part of Stage 17’s break into Pra Loup. His 9th place owes a lot to this stage but does not tell the whole story of Frank’s race and should not discredit his fantastic Tour. His dogged riding in the Alps ensured he stayed in touch with his rivals and he came out on the right side of a battle with Andrew Talansky, Warren Barguil and a free-falling Tony Gallopin. He was very unlucky to lose out on 8th place to Bauke Mollema. He is the first Swiss rider to achieve a top 10 since 1999.

Best domestique of the race?

Honourable mentions for the domestique duties of Geraint Thomas, Wout Poels (who was fantastic), Richie Porte, Jonathan Castroviejo and Marcel Sieberg but for me Alejandro Valverde takes it. A rider with such an ego that the idea of supporting another has often been incomprehensible, Valverde peppered the bunch with attacks in order to set up Quintana- and seemed happy to do so. Valverde may have cost a handful of riders’ opportunities over the years and so it was great to see him working as a team player. His early attacks could have been suicidal to his own ambitions but this years’ Liege-Bastogne-Liege winner put together an amazing race and finally got his Tour de France podium. It was obvious Quintana was the chosen rider and Valverde didn’t sulk. His efforts were rewarded.