Vincenzo Nibali: King of Lombardia and Shark of Pro Cycling

By MikeFranchetti in Opinion, Previews and Reviews on October 7, 2015March 27, 2018
No comments

Last Sunday in Lombardia Vincenzo Nibali dashed away on the descent of the Civiglio and soloed to his first Monument win. In doing so, he became the first multiple Grand Tour winner since Laurent Fignon (1989) to add a Monument to their Palmares. There was a strange inevitability to it all. Nibali had been in hot form in Italy and had the bit between his teeth following his Vuelta expulsion. But Monuments should never be this straightforward. A small group remained after the day’s hardest climbs and Nibali attacked on the descent, a discipline where he is superior. Valverde, another adept downhiller, switched off momentarily at the back of the group and ‘The Shark’ had gone.

There was another hill to come, where Daniel Moreno closed in on Nibali somewhat, but the damage had been done. Even as the gap floated at around 20 seconds you got the feeling it was still Nibali’s day. Whether or not Lombardia had been in Nibali’s plans since the start of the season we will never know; but the way he attacked both the Coppi Agostoni (2nd) and Coppi Bernocchi (1st) at the end of September gave a good indication that Nibali wanted the win.

Italians were no doubt happy to see the Il Lombardia title return home following a stretch of six editions back to Damiano Cunego’s third win. Last year, Nibali was the sixth man added to the list of riders to have won all three Grand Tours and he now joins four of them in having a Monument.

Whilst the likes of Cunego and Valverde have a handful of Monuments and one grand Tour, neither have all three or, indeed, the Tour de France. They also seem to be very different riders to Nibali who has transitioned from a measured stage racer into something more explosive.

Over the same period, roughly starting with his move to Astana in 2013, Nibali has faced more scrutiny from the media, fans and even his own team management.  It’s difficult to pinpoint when Nibali stopped being recognized as cycling’s most consistent stage race talent but just 12 months ago he was riding the wave of his Tour win and had barely a strike against his name.  His Grand Tour record for Astana reads 1st-2nd-1st-4th and his overall record is not much different.

His win at Il Lombardia is not a shock but a natural progression for a man who’s won the Italian title twice, come fourth at the Worlds and finished second at Liege-Bastogne-Liege behind none other than Maxim Iglinsky. The Kazakh rider was one of the two Astana brothers to give positive tests and plunge the team into controversy. The fact people have such different views on Nibali isn’t helped by the fact he rides for Astana, one of the least likely jerseys to spot on your commute.

Back in his Liquigas days Nibali cut a more reserved figure but his successes have thrust him into the media eye. Nibali was one of two lime green jerseys – the other being Roman Kreuziger – who stuck with the lead bunch in the 2009 Tour and eventually finished sixth. A year later he rode in support of Ivan Basso at the Giro and finished third. In 2012 we first caught a glimpse of his fire as called for Bradley Wiggins to show some respect following a string of headlines and a whole lot of nothing. Just one day later however, Nibali and Wiggins made peace at the finish line extending hands and sorting out their differences in a brief exchange.

However, since his move to Astana, Nibali has not helped himself. Perhaps frustrated by Alexander Vinokourov’s put downs (two Grand Tours in two years apparently undeserving of a little slack), Nibali’s temper boiled over this past season and, though usually poker-faced, he lost his cool in July. On Stage 6 of the Tour de France to the Mur-de-Bretagne, Tony Martin inexplicably crashed triggering a domino effect and knocking Chris Froome into the defending champion. The story goes that Nibali threw a bottle at Froome at the finish and the two confronted each other back at the team buses. After this exchange Nibali gave a surprisingly calm interview, stating he did not realise the crash had not been Froome’s fault. Nibali went on to joke, perhaps disguising a heated affair, that the pair were ‘not footballers’. His attitude in these situations is refreshing, seemingly able to heat up and cool down without extending conflict. It’s also a sign he knows he can go too far and is happy to quickly back-pedal.

Unfortunately, at this year’s Tour things got worse for Nibali. After working hard to get himself back into the podium race, Nibali claimed victory on Stage 19 with a shark-like attack on the Col de la Croix de Fer at precisely the moment Froome suffered a mechanical. Even the hardiest of Nibali detractors will struggle to argue he was attacking Froome’s yellow jersey (such was the gap between the pair) but something inside of him decided to go at that moment and it left a bad taste. It tainted what could have been his redeeming Tour de France moment. The Tour ended with Nibali having beaten all his rivals from the 2014 Tour again – bar Valverde – but he will want to return to France to put things right again. The Tour was a difficult watch for Nibali fans.

A third moment came at this year’s Vuelta when Nibali held on to his team car after crashing and received a motor boost as he chased back. Though this happens all year round, footage shows how this car pull is on a whole new and ridiculous level. Nibali was actually disqualified from the race (and from racing anywhere till the Vuelta finished) and this harsh ruling will be a hard to keep consistent. Nibali pieced together some half-baked response but he sounded very much like a frustrated, angry and embarrassed rider.

He was so pent up after this stage of the Vuelta that it is a testament to his mentality that he channeled what was left of his energy into a super spell of racing in Italy. By claiming Il Lombardia, Nibali is once again approaching the off season with a lot to feel good about. Even Astana, and particularly Italian director Giuseppe Martinelli, must be content with his season’s returns.

Through the difficult moments it is worth remembering everything likeable about Nibali. After his dominant Tour de France win a lot more was written about him. I remember reading a great story about child-Nibali taking photos of races in Messina and selling them to buy his own bike parts. Next season it is important he cleans up some of the mess he has made and strengthens his teetering reputation. Whilst he might struggle to take down Froome and Quintana, Nibali’s got plenty to offer. Very few riders have experienced his level of success and he is a master of making the most of what he has to offer. He is unpredictable and his attacks are always exciting – one moment he is lost in the wheels, the next he is up the road. 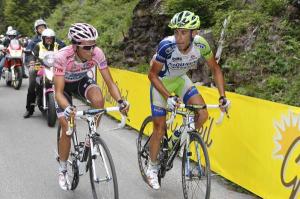 Nibali’s exploits on the cobbles at the Tour de France have got me wondering if there is one race left to add to his Palmares in Paris-Roubaix. Nibali goes so well on the cobbles and it would be fantastic to see him try. It seems unfathomable that Nibali would finish ahead of the likes of Fabian Cancellara and Peter Sagan, but parallels can be drawn to Bernard Hinault’s Roubaix win in 1981 ahead of Roger De Vlaeminck. Things like that don’t happen too often these days and the gap between Grand Tour riders and Classics specialists continues to widen. Luckily, Nibali does his own thing.