Five of the best… Transfers You Might Have Missed

Whilst there have been only a handful of big name transfers ahead of the 2016 season there are a whole host of deals that haven’t reached the headlines. In addition to Team Sky’s super squad strengthening (Michal Kwiatkowski, Mikel Landa, Benat Intxausti) other members of the World Tour have seen significant reshuffles including Trek, Cannondale and Lampre-Merida. Here are five of the best transfers you might have missed.

One of the first transfers to catch my eye was Enrico Battaglin’s move to Lotto NL-Jumbo not least because the double Giro stage winner will be the first Italian to join the Netherlands’ premier cycling team. The team were defined by the best Dutch riders through their Rabobank days with Oscar Freire and Dennis Menchov notable exceptions from across the borders. The best news for Battaglin is that he’ll be taking his talents to the World Tour. Riding for Bardiani, Battaglin rarely ventured out of Italy until 2014. He has, however, started the Amstel Gold Race twice, with no success, but could find himself with greater protection should he ride again next year. His Giro exploits have showcased his breakaway credentials, though he is no stranger to bunch sprints and can look best when mixing it on ramped finishes. He came close to a third Giro stage win at this year’s race – Stage 5 from Groessto to Fiuggi. Joining the World Tour, Battaglin will surely continue on an upwards trajectory but may need to seek a specialism and refine his goals. Whilst Bardiani could extend to him a free role, Lotto may insist on a focus on the Classics.

A year ago Nelson Oliviera was relatively unknown despite his cluster of impressive time trial results. As a 22 year old he grabbed a top 20 in the World Championship time trial before putting in a similar performance at the London Olympics. In 2014 he moved to Lampre alongside fellow Portuguese rider and World Road Race Champion Rui Costa.  In his first season he stayed outside of the global eye despite becoming a double National Champion. He ended that year with seventh place at the World ITT. In 2015 something changed and Nelson Oliviera began to show up in breakaways, most notably at the Vuelta a Espana. Following a solid Tour de France he excelled at the Vuelta and was an unlikely winner from the huge breakaway on Stage 13 powering away from his companions and finishing with a sizeable gap. Days later he came close to repeating his efforts on the similar looking Stage 19, this time missing out to Alexis Gougeard. In the second half of the Vuelta Oliviera was somewhat of a revelation but, yet again, garnered little hype. My opinion changed on Oliviera in 2015 as he began to show his stage winning potential alongside his big engine. Upgrading to Movistar may mean he is asked to protect the likes of Nairo Quintana but I hope to see his aggressive side once more.

At the age of 19 Danny van Poppel became the youngest rider since the war to ride the Tour de France. After five hours of Grand Tour racing he sat third in the GC having sprinted to a podium spot in Bastia behind Marcel Kittel and Alexander Kristoff. Now aged 22, Van Poppel has joined cycling’s most dominant stage racing power in Team Sky. The positives are obvious with Sky’s excellent development programme paying dividends for nearly all riders that pass through their doors. The worry is, however, that the Dutchman is joining a team lacking in a serious sprint train. There are enough strongmen in the squad to assemble one, and Ben Swift and Elia Viviani have been successful during their time there, but Dave Brailsford is unlikely to pick a team with Van Poppel as a leader. The strides he made last year were often of his own making and a friendly rivalry with Giacomo Nizzolo meant the two often sprinted against each other (the Eneco Tour). Van Poppel struck gold at the Vuelta when claiming the scalp of John Degenkolb and Team Sky are more than capable of releasing his full potential.

At 34 Hesjedal’s best days may be behind him but you wouldn’t feel comfortable saying so having watched him attack in Sestriere or refuse to lie down after being caught on Alpe d’Huez.  With years of Grand Tour racing experience it would be easy to place Hesjedal alongside Trek’s Frank Schleck and Hamiar Zubeldia; harden pros who, as seen at this year’s Vuelta, are capable of rolling back the years. But in truth the Canadian could be so much more than this and more often than not his legs can respond to his increasingly aggressive mentality. One thing Hesjedal needs is a victory with just one coming since his 2012 Giro title. Looking beyond this, Trek may have finally signed a rider able to support Bauke Mollema on the slopes of the Tour de France. Some still claim Mollema is a potential Grand Tour winner but he is so often left hanging onto wheels when rival teams put their foot down. Trek have been active in the transfer market this year and whilst the team has lacked a true identity since its Radioshack days, it has the talent to do some damage in 2016.

Bob Jungels is a huge talent and it’s no surprise he is heading to Etixx for the 2016 season. He swept up the wins in his younger days and was the Luxembourg National Champion before he was 20. He was properly thrown into the World Tour in 2014 and last season showed he was already an adept competitor at the highest level. Early on this year he won the Etoile de Bessèges before making Trek’s squads for the Ardennes, Tour de Suisse and Tour de France. At the Tour he was active on the Lacets de Montvemier mixing it with climbers Pierre Rolland and Romain Bardet. It will be interesting to see what sort of rider Jungels truly is, or what Etixx try to mould him into. There have been flashes of Fabian Cancellara in him when twinning aggression with his time trial calibre but it is unforeseeable that he will develop into one for the cobbles. He could also shed some pounds and develop into a climber following in the footsteps of compatriots Charly Gaul and, more recently, the Schlecks. After parting ways with Rigoberto Uran and Michal Kwiatkowski the balance of Etixx’s squad is skewed greatly towards the one day races (even more than it always has been) and, with Julian Alaphillipe considered a future star of the Ardennes, Jungels could get pushed towards Grand Tour leadership. 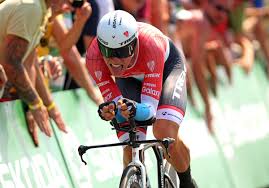