At 29 and one of the biggest names at Lampre-Merida, 2013 World Champion Rui Costa will start the forthcoming season in search of more big wins. After a mixed but respectable 2015 Costa could be ready to draw a line under the last four years – a whirlwind of mighty victories, illness and a selection of near-misses. 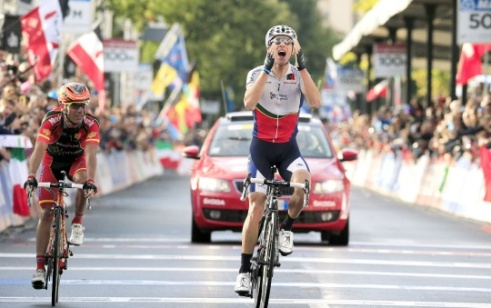 In terms of results, Costa’s 2015 set hold up reasonably well against riders of similar caliber with top five placings in Amstel Gold and Liege-Bastogne-Liege serving as reminders of his talent. In many ways it was a season of rebuilding after falling to the ‘Rainbow Curse’ in his first year at Lampre. I’m not convinced by the curse or its powers and looking at the results of pre and post World Championship winning years it’s possible to dispel its existence. After the high of a Worlds victory – always at the back end of a season – you would do extremely well to avoid taking a step down.

Fans of the Costa – for which there are lots, a quirk of cycling being that he and compatriot Thiago Machado receive stacks of fan mail at the Tour de France, Costa twice topping the list ahead of Alejandro Valverde – will rightly point out his solid stage racing form in races such as Paris-Nice, the Dauphine and the Tour of Switzerland where he has twice been crowned champion. Despite this, however, since his World Championship win Costa has seen his greatest disappointments on the biggest stage of all, the Tour de France.

Since signing, Costa has not been chosen to ride Lampre’s home grand tour and has instead followed a schedule that includes leading the team at the Tour de France. However, on both occasions he has abandoned the race with illness or injury concerns and his double stage-winning 2013 seems a distant memory. Whilst it would be harsh to criticize Costa given his mitigating circumstances, back-to-back Tour abandonments are the sorest of spots in his recent history. Often strong at the Giro, Lampre have reasons for concern over their recent Tour participations and pressure is building on leader Costa.

In 2013 he soared away from breakaway packs and ascended to victories on two high mountain stages. He was that year’s revelatory climber in much the same way Rafal Majka emerged the following year. Right now those sorts of wins seem far away with Costa a noted threat and not given the same freedom to attack.

His first crack at a Tour GC in 2014 was actually going pretty well as he floated around 10th position whilst battling a worsening bronchitis. On the second rest day he was diagnosed with pneumonia and a sensible decision followed suit. Nothing seemed to click last time round, however, and a pained Costa withdrew after Stage 10.

Costa and Lampre may once again agree on his same practiced schedule (Pairs-Nice, the Ardennes, Tour de France) but greater emphasis should be put on one day races where Costa knows what it takes to win. A serious attempt at Il Lombardia may even be a target, a race he placed third at in 2014. There may be a temptation for Costa to mix things up a little in 2016 but perhaps all he needs is a slice of luck and an injury-free year.