It’s the end of February and we can all start looking forward to Cancellara-solo attacks, Ian Stannard defying the odds, punctures, falls, mud, velodromes and lots and lots of Etixx Quick-Step.

The classics campaign – the one we know and love – kicks off this Saturday with Omloop Het Nieuwsblad and the sprinters are called on a day later at Kuurne-Bruxelles-Kuurne. In March we rip through Le Samyn, Strade Bianche and Dwars door Vlaanderen, plus Flanders’ finest ‘preparation’ races – E3 Harelbeke and Gent Wevelgem.  A sore thumb amongst this company is the mighty Milan San – Remo, offering a completely different challenge and marking the start of the season’s Monuments.

April starts with a bang in the shape of Monuments two and three, with the Tour of Flanders on April 3rd and Paris-Roubaix just one week later. We then head into Ardennes territory but we’ll put that aside, for now.

The Belgian classics (and, of course, Roubaix) are defined by iconic cobbled stretches. The races are hard and long, the weather often bad and challengers aren’t afraid to be a little heavy in order to gain power. For the last few years the same names have surfaced in mid-February and this year’s no different; step forward Greg Van Avermaet, Niki Terpstra, Zdenek Stybar, Peter Sagan etc…

Last season injury robbed fans of both Tom Boonen and Fabian Cancellara, the pair who almost monopolized the spring for the better part of ten years. Both are back for 2016 and there’s nothing to suggest they won’t be contesting the top spot of the podium. Cancellara, in particular, has started the season strongly and he could be announcing his return to the cobbles with a bang. He is likely to skip the opening weekend but he’ll have his eyes fixed firmly on the biggest races.

Omloop Het Nieuwsblad is over a month before ‘the big two’ and whilst the starting cast is dotted with big names, they’re unlikely to be at their peaks. The last two editions have been won by Sky’s Ian Stannard and in his second, you may recall, he rode three Etixx-Quick Step riders off his wheel as their tactics imploded like something from an episode of Whacky Races. There’s no reason why Stannard should start heavy favourite this time around but he obviously knows a trick or two.

Another man who could take the win is the in-form Van Avermaet. He could be accused of ‘biting off more than he can chew’ when it comes to race selection but usually has a strong hand throughout the spring. He was a very present figure in the races of Qatar and Oman and there could be none stronger on Saturday afternoon.

Katusha should be bringing Alexander Kristoff to the opening weekend and his unrivalled win rate puts him towards the top of any bookie’s list. I’ll also be keeping an eye on Arnaud Demare  who now clearly lacks the speed for the purest World Tour sprints but has the potential to be an interesting classics rider over the next five years.

The Belgian races often see strong wildcard teams and it’s not out of the question that a Rompoot or Wanty rider could sneak into the top ten this weekend.  The races are to them what the Tour de France is to the likes of Direct Energie. With the classics commencing and both Paris-Nice and Tirreno-Adriatico marking the return of World Tour stage racing, March can’t come sooner enough. 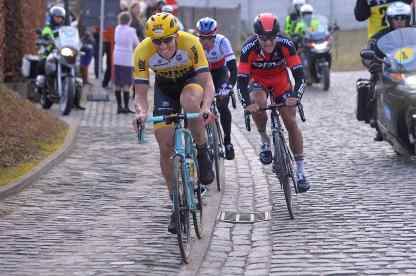