Twelve months ago Lotto NL-Jumbo’s Dylan Groenewegen was scarcely a blip on pro cycling’s radar. His Rompoot team would frequently miss out on the highest level events and the Dutchman was left to try his hand in races such as Etoile de Besseges, Bayern Rundfahrt and the World Ports Classic. 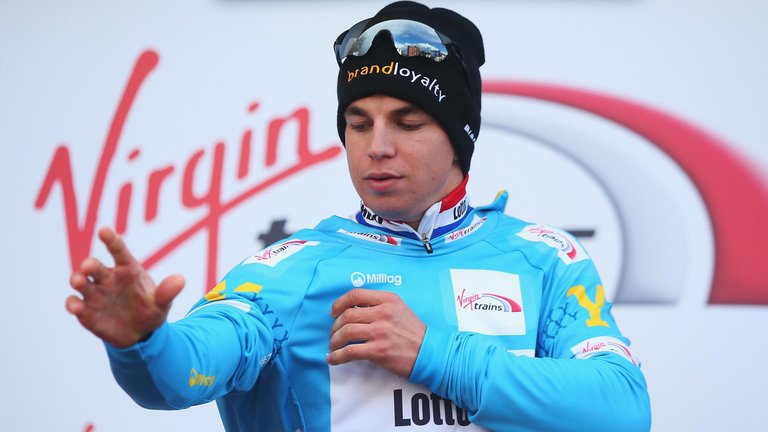 However, at just 21 years of age, these were the perfect races for Groenewegen to learn his trade and he claimed a top five finish in each of the four stage races he took part in last May. He placed fourth to Roubaix champion John Degenkolb in Germany before mixing it with strongmen Tom Boonen and Jens Debusschere at the Baloise Belgium Tour. His recognisable surname continued to crop up throughout 2015 with a fourth place at the whopping 253km Dutch nationals a standout result.

Things got even better for Groenewegen last August with a pair of victories in one day classics and a contract with Lotto ahead of the 2016 season. By early February he was making a statement for his new team, defeating Nacer Bouhanni at the Volta a la Valenciana. It was when returning to the Tour de Yorkshire that Groenewegen made his mark in front of TV cameras, winning stage 1 and spending two days as race leader. His breakout season shows no signs of stopping – he defeated Andre Greipel at Rund um Koln just last week.

Whilst nobody will pretend Rund um Koln was a big target for Greipel, he would have been carrying some form with the race sandwiched between his Giro and Tour peaks. However, it’s not just who Groenewegen’s beaten that’s impressive but the nature of the races he contests.

Whilst he can do the quick stuff – as shown by his second place jaunt round Valencia in February – he seems most at home on gruelling days out in north Europe. He’s excelled in Yorkshire – known for its deceptively hard profiles – as well as consistently performing well when the kilometres tick past 200.

So what’s next for the Amsterdam native? A stage-winning debut at the Tour de France would take Groenewegen to dream world but toppling the big guns on the grandest stage of them all should be a step too far. The omens aren’t great for Dutch sprinters at the Tour with a trip back to the year 2000 needed to find their last bunch sprint win – the fantastic Erik Dekker outfoxing Erik Zabel and company in Lausanne.

Looking at Groenewegen’s schedule over the last few years he seems a candidate for success in the big one day races with Kuurne-Bruxelles-Kuurne likely to suit (he was fourth there this year). With regards to a first World Tour success, it will be interesting to see if he holds form until the Eneco Tour in September. LottoNL-Jumbo will be keen to take stages in their home race and the typical Eneco terrain looks good for Groenewegen.

The Tour de France comes first though and Groenewegen was named in Lotto’s long list earlier this week. Also in the selection mix are a number of his would-be leadout train but the team will also hope to support to one, or both, of Robert Gesink and Wilco Kelderman. Whatever happens in July, expect to see plenty of Groenewegen over the next decade.