Selecting the ‘best’ Tour de France stages requires consideration of a variety of factors. Firstly there’s race impact with a GC-shaping stage far more likely to leave a mark in the history books. Any stage with enough time gaps to leave viewers doing mental gymnastics to figure out the state of the classification will always have extra importance. These stages will often be at the business end of the race; how good can an opening stage actually be?

The length of the stage will also be taken into account, or rather, what proportion of the stage will be ridden in earnest. The high mountains are generally accepted as the best playgrounds but sometimes the most unassuming of stages quickly turn into classics. Consider too the excitement created by late twists, comebacks, close finishes and back-stories and you’ll soon have a long list of characteristics to juggle.

That’s when personal opinion joins the party. Whilst evidence can be thrown into many ‘best ever’ debates, Tour stages are highly subjective. Expansive coverage since the turn of the century can also lead to bias towards recent Tours. With all this in mind, here’s my ten of the best. 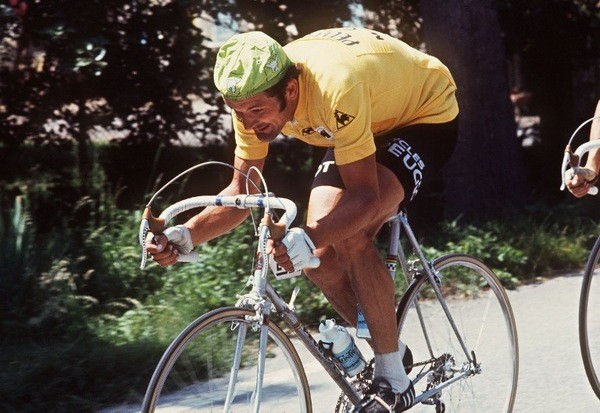 My list starts with 1972 and Bernard Thevenet, a handful of years before he cracked Eddie Merckx in Pra Loup on the way to his first Tour de France victory. On Stage 7 of that year’s race Thevenet, still well in the GC mix, raced down a treacherous descent with Luis Ocana and Lucien Van Impe for company. Ocana crashed and Thevenet was brought down suffering a nasty concussion and even becoming amnesic. The 24 year-old would eventually recognise his Peugeot Jersey and status as a Tour de France participant before digging deep to complete the stage and losing over six minutes.

Mont Ventoux waited four days later and Thevenet was about to lay down a huge marker of his ability. Ocana’s relentless early attacks were shut down by Merckx, and Thevenet was with the leaders as Ventoux approached. The Frenchman put in an attack of his own and was able to break free from the group. He rode away for his third Tour stage win, summiting Ventoux with a 34 second advantage. The race would be dominated by Merckx but Thevenet claimed another stage win in Ballon d’Alsace and his progression to the top of the sport was well under way. 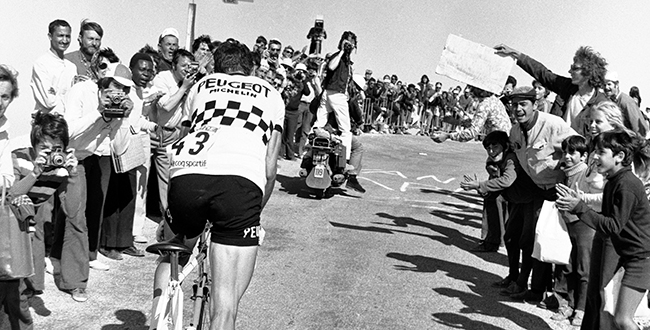 Five years later and swapping Ventoux for the Alps, we reach Hennie Kuiper’s victory on Alpe d’Huez and Thevenet’s self-proclaimed hardest day. Van Impe, the winner of the previous Tour, escaped early and looked to use his renowned climbing strength to solo up Alpe d’Huez for stage success and the GC lead. Thevenet was in yellow and set about chasing the lone leader towing Dutch duo Hennie Kuiper and Joop Zoetemelk up the early slopes. He grew frustrated with the pair’s lack of turns as both Dutchmen forced Thevenet to make the pace and defend his jersey.

Van Impe’s surge was wrecked when he collided with a television car that badly damaged his rear wheel. Behind, Kuiper attacked Thevenet and raced passed Van Impe towards certain stage glory. The gap grew bigger and Thevenet’s focus turned to protecting his position in the GC.

Kuiper became the second Dutchman in successive years to win on Alpe d’Huez (following Zoetemelk) establishing the climb as a favourite of the Netherlands. An angry and exhausted Thevenet kept his jersey by a mere eight seconds whilst a furious Van Impe suffered losses of two minutes. The three protagonists would go on to fill the podium in Paris – Thevenet claiming his second and final Tour victory. Kuiper would win again on Alpe d’Huez the following year and the Netherlands would go on to take eight of the first fourteen stages that finished at the summit. 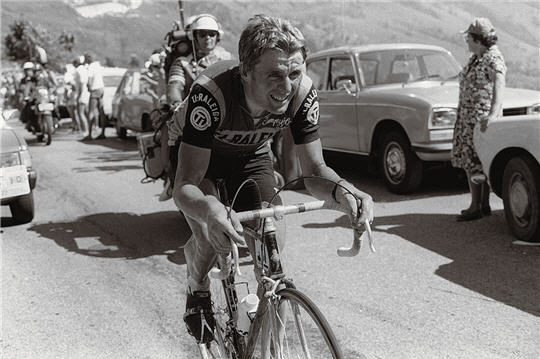 The 1987 Tour de France is fondly remembered as one of the best of all time. With eight race leaders and at 25 stages long, the Tour’s best day came on Stage 21 and the climb of La Plagne. When the race entered the Alps, Stephen Roche took the lead from French all-rounder Jean-Francois Bernard but lost the jersey a day later to Pedro Delgado on Alpe d’Huez. Delgado was a pure climber and knew he would need to increase his newly acquired lead before the time trial on the penultimate day – La Plagne was a brute of a climb and served up a chance.

Colombians Luis Herrera and Fernando Parra put the peloton on the back foot on the early climbs but a response on the descent by Roche, Delgado and Charly Mottet was successful in ridding the lead group of the dangerous duo. However, Delgado had also lost his P.D.M team-mates and an opportunistic Roche attacked on the Col de Madeleine. Despite holding a gap for the duration of the climb, Roche was caught by Delgado, back with his team-mates, at the foot of La Plagne. Roche has spoken about the calculations he made at this point, anticipating that Delgado had to attack and considering his own capabilities.

Sure enough, Delgado attacked and Roche chose not to follow. The Spaniard led by 25 seconds at the day’s start but he needed around 60 to hold off Roche on the 38km time-trial in Dijon. At one point on La Plagne he was over a minute ahead but Roche’s interested was sparked when he was told the gap had stopped growing. The last 4km of the climb gave Roche a chance to show his strength and haul back Delgado but nobody expected what followed – least of all ITV commentator Phil Liggett. Roche ‘buried himself’ in the final kilometres as Delgado appeared to crack. Laurent Fignon took the stage, Delgado rolled over the line in third and a handful of seconds behind him Roche appeared round the final corner – ‘that looks like Stephen Roche…it’s Stephen Roche!’ cried Liggett. He had lost a mere five seconds and honed in on a maiden Tour victory. It had not been easy and the Irishman collapsed into the care of the medical team, communicating through blinks. With the aid of a survival blanket and oxygen mask, Roche recovered and went on to win the Tour. 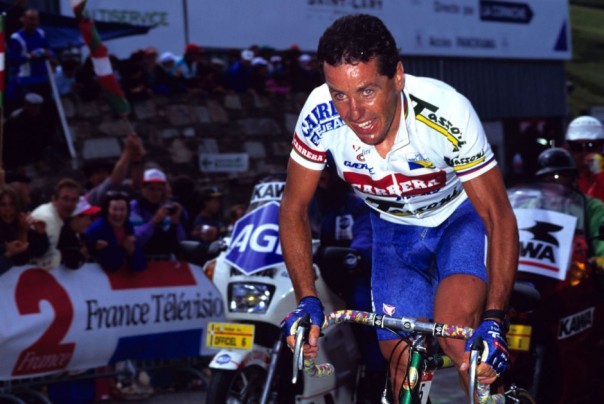 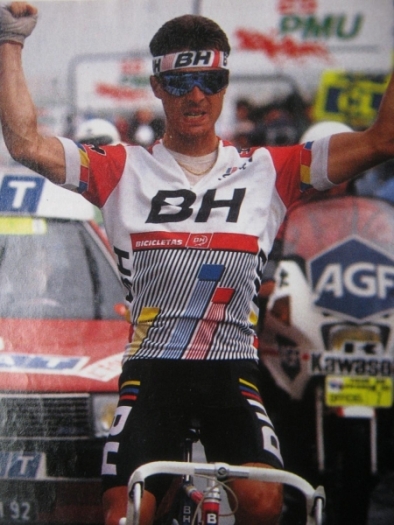 I came across this stage when viewing a selection by Richard Moore in his excellent book ‘Etape’. The stage winner has a wonderful back story but that should in no way diminish his physical feat. Joel Pelier was a French domestique for the BH team whose Tour performances included collapsing on the summit of the Col du Granon in 1986. He’d quit Laurent Fignon’s powerful French squad Super-U to join his Spanish team the previous year. Pelier had never in his professional career been watched by both his parents due to his brother’s condition requiring constant care. However, on Stage 17 of the 1989 race his parents were able to watch near to the stage’s finish and Pelier – unaware of their presence – would make a solo attack 150km from the line. His lead grew to a whopping 17 minutes – a sign the peloton did not see him as a threat – before they began to pull him back led by the sprint-seeking Panasonic team. With his dream now a possibility, Pelier continued through the wind and rain towards his destination in Futuroscope. Counter-attacks started from the chasing pack but Pelier refused to crack and the situation remained in his favour. His lead had collapsed to 1 minute 34 inside the final kilometre but Pelier was not for catching. He had ridden alone for over four hours, over a hundred miles in pouring rain. His jubilant parents waited and tears streamed down Pelier’s face as he struggled to come to terms with their appearance and what he had achieved. It was Pelier’s only Tour de France win but both his attack and teary celebration should be remembered as one of the finest stories in pro cycling.

This one’s a little awkward as the 1998 ‘Tour de Dope’ has seen nearly every stage winner, GC contender and sprinter caught for, or admit to, drug use. There was also the Festina affair, the rider protest on July 29th and a handful of other stories that leave a bad taste. The depressing truth, however, is that the 1998 race was not especially different to any other Tour from the 90s, or early 2000s, and that our sport’s champions having been failing tests since the mid-70s. It might be hard to get any enjoyment from the 1998 race now, but at the time the performances of one man were incredible. Though there is plenty of evidence to prove the late Marco Pantani doped (not least his destruction of a drugged-up peloton) he did not actually fail tests in the year 1998 – the pinnacle of his career.

In 1994 Pantani emerged on the scene with podiums at the Giro and Tour. At the Giro he won back-to-back stages despite being on the team to support his hero Claudio Chiappucci. It was a passing of the torch moment but Pantani would be made to wait three years before riding another. In 1995 a head-on collision with a car left Pantani with a fractured left leg and he would not return until 1997 finishing third at the Tour and setting a record ascent time of Alpe d’Huez.

After winning the 1998 Giro, Pantani headed to the Tour with renewed ambition but found odds stacked heavily against him after finishing 181st in the prologue and losing four minutes to Ullrich in the first time-trial. However, a spirited Pyrenean performance left him three minutes off the lead as the race entered the Alps on Stage 15. Rain poured as the riders started a punishing day that included the Col de la Croix Fer, the Col du Telegraph, the Galibier and finally Les Deux Alpes. Over 10km from the summit of the Galibier Pantani made his move and left his rivals behind. At the top a 45km descent awaited before the final summit and Pantani was looking at a long stretch alone in the saddle. In a noteworthy moment, Pantani would stop briefly after struggling to put a wind jacket on. Ullrich had failed to respond on the Galibier but was not helped by a puncture on the descent. Sporting his iconic bandana, Pantani stayed strong on Les Deux Alpes whilst a broken Ullrich was passed by several groups. All bar three riders finished over five minutes behind Pantani with Ullrich losing nearly nine. Pantani was in a league of his own on Stage 15 and his dominant display would lead to overall victory. 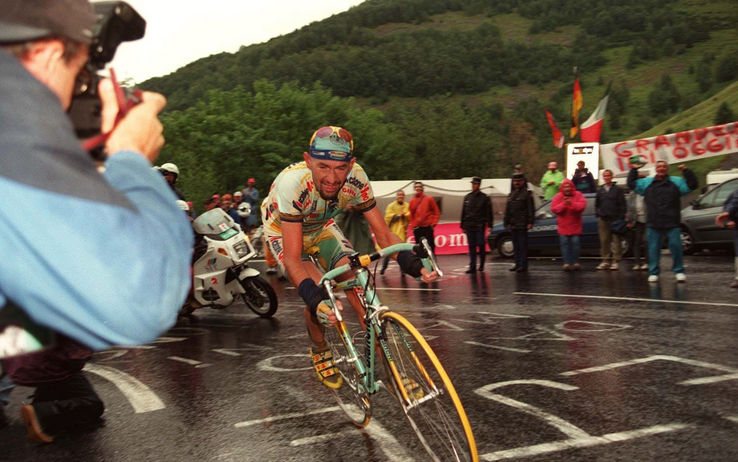