Less than 90 seconds behind Esteban Chaves at Il Lombardia last weekend was a certain 22 year-old named Pierre Latour. He rolled over the line in tenth but was given the same time as Alejandro Valverde in sixth. Latour, like teammates Jan Bakelants, Domenico Pozzovivo and Alexis Vuillermoz, was behind Tour de France runner-up Romain Bardet in the Ag2r pecking order but soldiered on over the monstrous Lombardia course for another impressive result in an already impressive season. 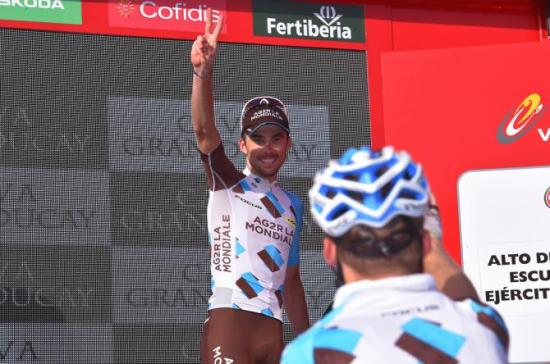 In 2014 Latour placed third in the Piccolo Giro di Lombardia behind Dylan Teuns and Gianni Moscon – a podium of lofty potential. Of the three, Latour has taken to the World Tour the quickest and has frequently mixed it with the big names this season (Sky have gotten hold of Moscon and he too remains a big talent).

Though his 2016 performances have grabbed significantly more attention, it was at last year’s Route De Sud where he first caught the eye. Baptisms of fire don’t come much hotter than racing the dancing duo of Alberto Contador and Nairo Quintana, but that’s exactly what Latour did on the Port de Balies. The two Tour de France rivals rode surprisingly aggressively (the Tour was just round the corner) but Latour clung on and even put in a move of his own. Eventually he finished half a minute back but took third on both the stage and GC.

Comparisons can be drawn to the final stage of this season’s Criterium International. On the final climb Latour held the smallest of gaps over a chase group led by Thibaut Pinot far longer than expected. Pinot, in the middle of a strong set of spring races, was rhythmically eating up the ground. By contrast, Latour looked as though he was losing a wrestling match with his bike.  Pinot made a move to catch Latour but the fight continued to the line. The elder Frenchman eventually prised open a gap of just seven seconds.

One more performance is a necessary mention; his brilliant Vuelta Espana stage win last month. One of the best two riders in a day-long break, Latour was tasked with outfoxing a sprightly Darwin Atapuma on the Alto di Aitana. The Colombian burst away in the closing stages into a lead which looked genuinely insurmountable.  Latour dug deep and clawed his way back, passing Atapuma late on and taking the stage. With this win Latour cemented his place as a top level climber on the World Tour.

It’s no surprise I’m a big fan of Latour when you consider Bardet – who finished fourth last weekend in Lombardia – is one of my favourite riders. Both are alumni of the Chambery Cyclisme Formation – Ag2r’s feeder team – and obvious comparisons can be made. They both share a style which is reminiscent of the old days and it’s hard to imagine Ag2r overloading them with cutting edge science and performance tests.

However, whilst Bardet is the more daring – not just downhill – Latour seems the more comfortable grinding away the kilometres and there’s been murmurings the numbers he churns out are greater than his team captain. Of course, everything is relative and Bardet is entering his prime years as an accomplished rider. Latour still lacks that little bit of road sense needed to float through the peloton and take up the best positions. He was also caught out by the blistering Stage 15 of this year’s Vuelta; the day that ended any GC ambitions. Neither are strong in the time trial, but Latour is young enough and strong enough to prevent this evolving into a fully-fledged Achilles heel.

So what’s next? In the short term Latour will settle for more of the same. This year he led the Tour of Switzerland for a day and was one second away from winning the Tour de l’Ain. Jean Christophe-Peraud is retiring and, with Vuillermoz and Bakelants suited to punchier affairs, Latour is the natural choice for Ag2r’s number two slot. The team don’t possess a leading sprinter and with Bardet favouring just one Grand Tour a season, Latour will likely be ushered into Vuelta or Giro leadership.

Is he good enough? Yes. At just 22 (23 by the start of next season) he won’t win a Grand Tour but he is competitive at World Tour level and could target a top ten finish. Should he fall away, his team won’t mind an adjustment in focus and a spell of stage-hunting. Ag2r’s consistent but unspectacular squad will welcome as many wins as possible.

Bardet is more than good enough, and young enough, to continue to act as a lightning rod for French media attention. Latour has the luxury of another pressure-free year doing what he is a good act; riding his bike. Nevertheless, Ag2r have shown they can turn potential into results and I’m expecting Latour to challenge for GCs in the next 18 months.