It the end it wasn’t to be for Tom Boonen. The stars aligned a week before for Philip Gilbert but Roubaix posed too many obstacles for Quick-Step to mastermind his perfect finale. It would be Greg Van Avermaet who finished the two velodrome laps first, returning from an early deficit to drag a small group away and gift BMC their first Monument.

You can forgive Van Avermaet for very nearly messing up the race’s final showdown. You can imagine he would have piled a lot of pressure on himself. Still searching for his maiden Monument, Van Avermaet had been the best rider of the cobbles season. He won Omloop, E3 and Gent-Wevelgem in splendid fashion before storming home for second place in Flanders. In Roubaix things started poorly with a crash prior to the Arenberg Forest leaving ‘GVA’ nearly a minute behind a group of rivals who weren’t exactly hanging around. A cursory glance at Twitter would have suggested his race was over. He fought back, utilised his teammates well, and tore away from many of his rivals on the Carrefour de l’Arbre.

Even then there was work to be done. He was tasked with maintaining a race winning gap with Quick-Step’s Zdenek Stybar acting as a passenger. Van Avermaet had won three of five cobbled classics this year yet was facing the possibility of being pickpocketed by a shrewd – and tactically stubborn – Czech. He was in danger of entering the summer season Monument-less for a tenth straight year despite an almighty collection of top tens.

Entering the velodrome he was a standout favourite but Stybar continued with his efforts to spook him by rising up the ramps to the top of the bank. Van Avermaet and fellow escapee Sebastian Langeveld stalled and Roubaix began to resemble an Olympic track final. Poise was broken when the leaders were joined by Gianni Moscon and Jaspar Stuyven. Even with an understanding of track racing cat and mouse, I can’t comprehend why the front trio let this happen. Stuyven, in particular, was a serious threat to the podium and Moscon was fearless as he moved passed into the lead.

Stybar reacted quickest and took a two length advantage into the final corner. Van Avermaet inched away in pursuit until finally his unmatched power became apparent and he caught Stybar with metres to spare. 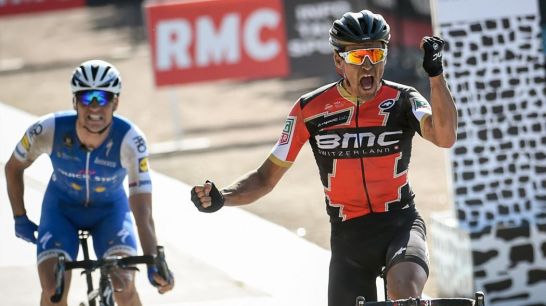 The whole race had closed in behind and Boonen would cross the line just twelve seconds later in thirteenth place. It wasn’t a race he’ll remember fondly but he was active through the key cobbles sectors and can count himself unlucky to have missed the divisive split. He has certainly looked strong enough this season and walking away from the sport will have been a difficult decision. With four wins, he retires level with Roger de Vlaeminck in Roubaix and I doubt we’ll ever see a five-timer. Since 1981 only two riders have successfully retained their Roubaix title with Boonen’s 2009 success being the most recent.

If Van Avermaet was to loan his engraved cobble to anybody, teammate Daniel Oss would be top of the list. The Italian’s presence at the front of the race – for the majority of the race – gave an added dimension to BMC’s plan. With Van Avermaet struggling early on, Oss may have temporarily been considered plan A. However, as the race unfurled, BMC were able to use him to force others to chase before finally he was caught and asked to make tempo prior to Van Avermaet’s attack. He still managed to finish 21st and sprinted over to embrace the race winner as soon as he’d dismounted.

And what of Peter Sagan? He deserves a mention for his wonderful attack – which could have been a winning attack – a whopping 75km from the finish. He looked strong alongside teammate Maciej Bodnar but a typically ill-timed Roubaix puncture stopped him dead in his tracks. He still held a narrow advantage after receiving a new wheel and tried to force another move on the Mons-en-Pevele section. Already beginning to look a beaten man, Sagan suffered a second puncture and never recovered. Second in San Remo, wiped out in Flanders and caught out in Roubaix, Sagan will be happy to see the back of the spring classics; A+ for effort, C- for results.