The second week of the Tour was always likely to be a bit weird. There were two stages ripe for Marcel Kittel, before a dash into the Pyrenees and some lumpy ones in the Massif Central. Overall the week receives a thumbs-up. Team Sky and Chris Froome are simultaneously in total control and spinning into frenzy. One minute the snazzy white jerseys are draining the peloton of riders, then next their standing at the roadside swapping wheels whilst Mikel Landa stares a hole into the nearest camera lens.

With a week to go just 77 seconds separates a very restless top six. Can Froome hold on for his most unconventional victory yet? 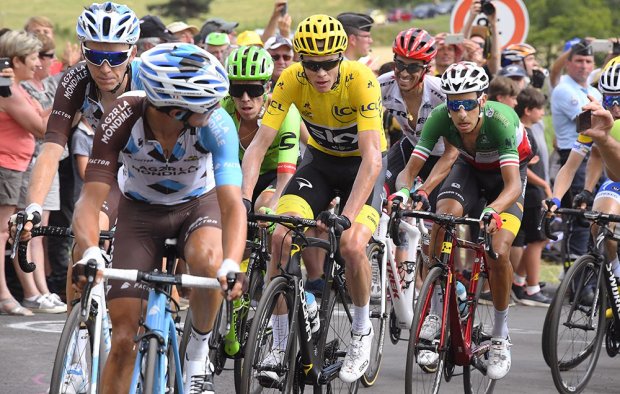 Give Me That Back

Heading into Stage 12, Chris Froome was 18 seconds clear of Fabio Aru and we all doubted if there was any life left in a tiresome Tour de France. As the Brit crested the last of the day’s three categorised climbs he was stretching out a very elite group with the help of Landa.

On the steep rise to the finish, Fabio Aru counter-attacked a bold George Bennett and launched a sprint to the line. He was pursued by Rigoberto Uran and Romain Bardet with the Frenchman rallying late for a brilliant stage win.

Behind them, Froome was tapping out an awkward tempo which got progressively worse. In less than 500m, Froome lost 20 seconds and the race lead. As his trio of rivals crossed the line they turned round in unison and would have been pleased with the lack of yellow in their field of vision. Froome looked devoid of both energy and answers. The race was reinvigorated and Aru snatched the jersey by six seconds.

The wilder thinkers amongst us will wonder if it was a tactical ploy by Team Sky, such was the difficulty of controlling the following stage. Astana never looked particularly comfortable as Landa and Alberto Contador headed a number of a serious attacks. When they were joined by Warren Barguil and Nairo Quintana the group looked cohesive and rode away to a two minute advantage.

Thankfully Aru was looking better than most of his teammates and the group of favourites stayed locked together. The bizarre 100km stage eventually settled down and – despite the presence of Landa up front – Team Sky drove the chasing pack home led by Michal Kwiatkowski.

Aru’s second day in yellow wasn’t so good. The finale in Rodez hosted a battle between Michael Matthews and Greg van Avermaet but behind them the peloton splintered badly. An attentive Froome floated into seventh whilst the Italian National Champion was in a cluster of riders at a wayward 25 seconds. The jersey was given back and Aru found himself with an identical 18 second deficit.

Yesterday’s stage looked relatively straightforward but the excellent AG2R threw numbers at the final climb and Froome’s ownership of the yellow jersey was once again under threat. Team Sky had initially been sleeping and when Froome had yet another mechanical he was left in a furious chase. He was made to work hard but quickly reached the leading group.

If things continue like this the two Alpine stages should be good fun….

Landa is dangerously close to adding the 2017 Tour de France to his list named ‘Grand Tours I Could Have Won’.

Starting back at the 2015 Giro, Mikel Landa has often showed himself to be the best climber over a three week race. It’s difficult to argue he wasn’t the most comfortable pedal-spinner across the two Pyrenean stages and rumbles within Team Sky suggest they know it too. Landa may be tempted to split his list and add this year’s Tour to one named ‘Grand Tours I Could Have Won If Somebody Had Believed In Me’. That would leave the Giros of 2016 and 2017 to slot nicely onto ‘Grand Tours I Could Have Won If I Didn’t Have Food Poisoning or Crash’.

Froome’s record of real results is vastly superior to Landa which makes it difficult to argue his corner. Nevertheless, the savvy Spaniard is just 1:17 off the race and very much involved in this Tour de France final week.

Did the 100km Stage to Foix work? You’d have to say so. It would be difficult to think up a realistic version of events much more exciting than Friday’s two and a half hours. The stage might not go down as a classic – I still prefer both La Spezia (Giro 2015) and particularly Aramon Formigal (Vuelta 2016) – but it was crazy to see a stage so frenetic in the middle of July.

All that was missing was a gapped rider from the top five with most of us acknowledging that Nairo Quintana and Alberto Contador had only been afforded freedom due to their recent struggles. The pair did look good – just as they had done in last year’s Vuelta – suggesting they are big fans of the mini-stage.

Colombia’s multiple Grand Tour winner undid his good work when cracking on the Col de Peyra Taillade yesterday afternoon. He now sits in eleventh place overall; around five places lower than we all thought he would be, and ten places lower than he probably should be.

A lot of people have grown tired, frustrated or angry at Quintana; tired of watching him struggle on French slopes, frustrated by his choice to ride a taxing Giro/Tour double or angry at his tactical naivety.

The biggest quandary seems to be why he can’t (or doesn’t) produce his best rides in July. The answer this year would obviously have something to do with a Giro d’Italia which he very nearly won. Through all the trials and tribulations of May’s race, Quintana still bettered all but one rider.

Examine Quintana closely and there isn’t too much to moan about – he’s finished 1st and 2nd in his last two Grand Tours! Unfortunately, our expectations – combined with some of his questionable decisions – have led to the perception that Quintana is a great, big disappointment. He won’t ride the Vuelta and will want to fast-forward to 2018.

Hahahaha, no. One bad GT from Quintana, and he’s already no good anymore? He’s 27, for god’s sake.

Movistar need to go back drawing board. Get rid Quintana go with landa and maybe aru

Put The Drink Down

Soon after the finish of Stage 12, Uran was docked 20 seconds for taking and drinking a bottle inside the final 10km. In other words, Uran was punished for breaking one of the sketchiest rules in pro cycling. 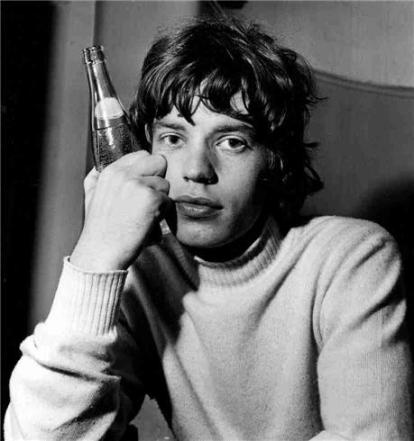 George Bennett – having his first great Tour de France – also fell victim to the rulebook but was smiling when he admitted he didn’t know he wasn’t allowed to take a bottle from the roadside (as opposed to the team car). He admitted he had previously done so but was probably miles from the cameras…

It was only when footage emerged of the day’s victor, Romain Bardet, swigging from a bottle that the organizers began to backtrack. All time penalties were soon overturned and the standings were reset to normal. Initially happy to throw penalties around, I don’t think they were overly keen to punish Bardet or mess up a fantastic stage.

Too Easy For Kittel

At the start of the week Marcel Kittel was successful in adding wins number four and five to his already excellent Tour. The first was the most alarming. With the ease of somebody collecting a baguette from the local bakery, Kittel passed Nacer Bouhanni and caught Dan McLay before easing into his most straightforward victory of the year.

The next day did, at least, prove more difficult. Edvald Boasson Hagen went early on one side of the road before Kittel made his inevitable launch. On this occasion he brought with him the ever-improving Dylan Groenewegen who fought to a half-length defeat. The Dutchman is reaching a good top speed and seems to be the only sprinter who can bring vague hope to the Champs Elysees.

After Stage 11, Kittel led Michael Matthews by a seemingly insurmountable 133 points in the green jersey competition.

Nevertheless, Matthews swatted away any talk of defeat in the best possible way. The following day he was tracked by Kittel into a large break but beat him in the intermediate sprint. Two days after that he did much more damage as he celebrated his second Tour stage in as many years when besting Greg Van Avermaet in Rodez.

Continually active, Matthews has now cut his deficit to 79 points. Kittel will have another 50 coming his way at some point but don’t expect Bling to roll over. Whatever happens, I hope his disappointing 13th on Stage 11 – by far his worst sprint of the race – doesn’t prove to be costly.

How great was Pierre-Luc Perichon on the upper slopes of the Col de Peyra Taillade? We’ve all seen riders zig-zag across the road when struggling to tame the percentages but the Frenchman seemed to do so as if following some predetermined strategy.

He even managed to maintain a relatively high tempo… despite losing the wheels of all those around him and nearly riding straight into the crowd. Good for him. I hope Fortuneo-Oscaro have another crack in the final week.

This Perichon zig-zag is one of my favorite moments today. Brings @LeTour closer to the fans than ever, any cyclist will know this feeling. pic.twitter.com/6be8618bY1

It was a quiet week for Guillaume Martin – the youngest and least experienced of the three Martins in this year’s Tour. I expected him to go on the attack – perhaps on Bastille Day – but he seems set on defending his top twenty finish overall. I don’t blame him and finishing in the top twenty in your first Tour de France is something to be proud of.

Tony Martin was active yesterday as he and Mauritis Lammertink attempted to give the bosses at Katusha something to smile about. We saw a flash of potential when he went solo ahead of the final climb but it was simply too much for the German. I suspect he’ll keep trying.

Dan Martin remains ‘Martin of The Race’ and sits comfortably in fifth spot in the GC. He’s been constantly active and after finishing 9th in last year’s race he looks hungry for more. I saw an interesting comment on Twitter yesterday. Dan Martin is 1:12 behind Froome and lost 1:15 on the day he crashed with Richie Porte…

Dan Martin 1’12” down on the yellow jersey now.

3 comments on “Tour Talk: Laying Claims To The Yellow Jersey”