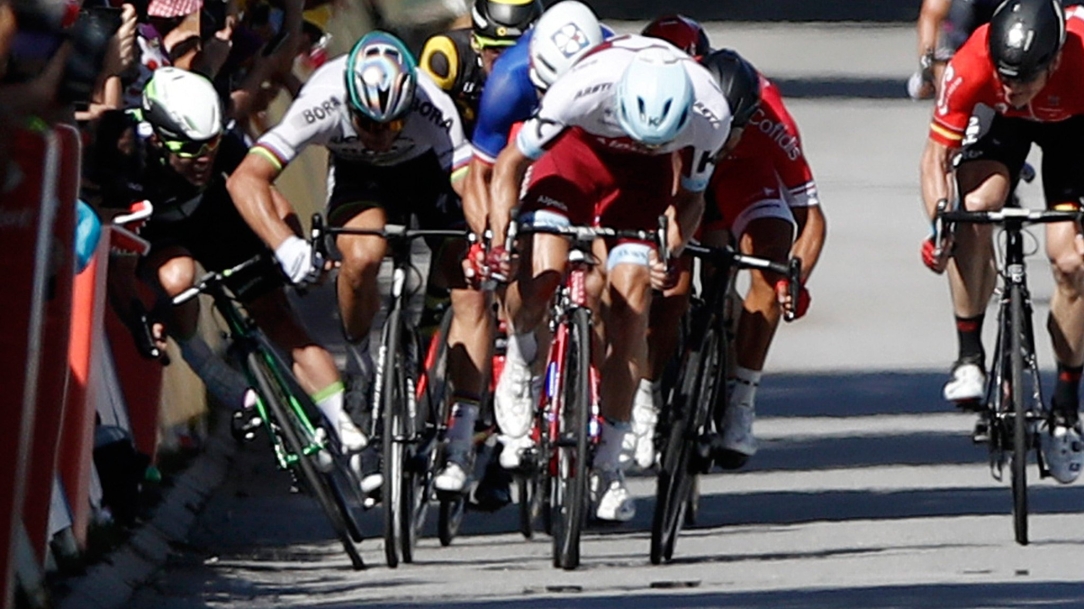 In recent years we’ve been treated to the stickiest of sticky bottles and the most ridiculous of car tows but nothing to challenge the great disqualifications of yesteryear. We did see Eduardo Sepulveda hitch a ride from a team car – nope, not his own – whilst searching for a spare wheel but many felt this was an innocent act of panic. Some race removals are even harder to believe especially with many not taking place on live feed cameras. Here are five of the, erm, best.

It’s 1949. It’s the seventh edition of Paris-Roubaix since cobbled racing returned from a World War II hiatus. Fausto Coppi is March’s Milan-Sanremo victor. His younger brother, Serse, fancies a slice of Velodrome fame. Unfortunately for the 25 year-old, he was unable to follow the race’s big move orchestrated by Frenchman André Mahé.

As Mahe and two others – Jacques Moujica and Frans Leenan – headed towards the Velodrome they were ushered down a road meant for team cars. The road was awkward and packed with vehicles and officials; Moujica crashed and Mahe headed through a gate leading to the Velodrome. He pushed his was through and sprinted for victory. And then minutes later the bunch came home. And Serse Coppi also sprinted to victory.

Tom Steels was a big name in sprinting in the late 90s but never achieved the career longevity of some of his rivals. In 1997 – twelve months before his debut Tour stage win – Steels was disqualified for losing his temper in childish fashion. Pro cyclists acting like children isn’t actually that rare but when sprinting at 70kmph there’s an added element of danger.

The bunch was hurtling home for a messy sprint in Bordeaux. Erik Zabel and Jeroen Biljlevens launched towards the line with a trainload of sprinters sweeping across the road. Steels – near the front but losing position – sits up, turns round, glares, reaches down, picks ups a bidon and launches it at GAN rider Frederic Moncassin. It’s difficult to argue Moncassin did anything wrong, let alone perform an act worthy of a bottle in the back. Even in the grainy TV coverage you can see the exact moment that Steels loses his temper and immediately seeks vengeance.

It was only Stage 2; a flat but wet day from Sorrento to Baia Domizia. With 50km to go the race seemed to be unfolding as normal. Five kilometres later two crashes had left a group of just 17 riders at the front of the race. Big names were down all over the road with a handful of riders heading to hospital. The lead group swelled to 35 as riders re-joined and they pressed on at race pace. It was estimated that 100 riders ended up on the floor and a big group rolled home with no urgency in protest against a lack of neutralisation.

Erik Zabel won the reduced sprint and only 35 riders made the time cut (upped to 51 when a UCI jury increased it by a meagre 25%). Predictably, the rest of the week was weird. Just 47 riders finished and most were over 13 minutes behind race winner Rolf Jarmann.

Wladimir belli was a Swiss-born Italian who spent most of his career at Lampre or Fassa Bortolo. He finished 12th, 13th, 6th, 7th, 11th and 7th again at the Giro d’Italia. He was that sort of rider. You know the ones. Think Domenico Pozzovivo.

His disqualification from the 2001 Giro was pretty simple. He reached in to throw a punch at a spectator. No nonsense. Caught on camera. Silly boy. Arrivederci.

But wait – this was not a regular spectator. This was the nephew of race leader Gilberto Simoni. Did Belli know this? Probably. An Italian report suggests the nephew had been hounding Belli for days targeting him with ‘insults and spitting’. Should this excuse Belli from disqualification? Probably not. Does this make me like him more? Absolutely. You suspect Simoni knew what his nephew was doing. Just to add fuel to the fire, Simoni comfortably won the Giro.

Niki Terpstra is a force in the spring classics. Without a notable sprint, he’s often forced into long solo moves and clever, tactical racing. He’s a tough rider and – by all accounts – a brilliant racer.

He also strikes me as the kind of guy who would empty your suitcase off the top of the hotel if you accidentally ate the last of his favourite cereal at the breakfast bar. I doubt he’s Mr.Popular in the peloton and he certainly divides fans. In 2014 he was excluded from his home race for shunting another rider towards the side of the road.

As Belgian Maarten Wynants attempted to move to the head of the lead group, Terpstra shut the door with an elbow/shoulder charge. Wynants threw out his own elbow – for which he was not punished – but an enraged Terpstra made sure he ended the incident with one final shove. Terpstra would later admit fault and apologised but added the line “…everybody knows I’m a guy with a lot of charisma”.

If some reason you missed it, 38 year-old Peter Pouly launched an attack on the final stage to jump up to first position and claim his third straight victory in Indonesia. Hours later he was disqualified for using a bike weighing less than 6.8kg. Apparently the bike hadn’t gone under the radar with many – including second place finisher Jai Crawford – commenting on its light appearance.

The saga dragged on with Pouly arguing his team had not purposefully cheated and even accusing Crawford of using a similarly weighted bike. Another story emerged that he had swapped to the bike of interest at the last minute after his regular bike had been mysteriously destroyed. Even so, why wasn’t the spare bike UCI compliant? What use is that?!

The UCI initially said the bike broke technological fraud laws (suggesting a motor) before correcting the article number to 12.0.019 – relating to bike weight. A long social media investigation was launched but the UCI held firm. Pouly was disqualified.