It’s unfortunate that ‘cycling’ and ‘doubting everything you see’ go together like ‘sunday club ride’ and ‘too much cake’. It’s worse when you’re faced with convicted dopers, or a team with the sketchiest reputation in the sport. When a general manager looks like he narrowly missed out on the role of a James Bond villain, it’s always going to be an uphill struggle to justify cheering an otherwise brilliant victory. You’ll have to cling on to your morals as you grind your way towards an ethical acceptance; which is exactly why cycling fans are inventing a new set of rules. I love Astana and here’s why.

In a previous post I wrote that Alexander Vinokourov helped me get hooked on pro cycling, stating: “When Armstrong was at his most dominant I found Jan Ullrich to be a fairly boring alternative. The only logical, enjoyable and vaguely plausible alternative to the big Texan came in the form of the blonde haired and reckless Vinokourov”.

In my younger years, I lacked sufficient knowledge to cast suspicion over performance. I wore a Livestrong band. I had T-Mobile gloves and a Rabobank bottle. I just liked big mountains and surprise results. It was the happiest I’ve been as a cycling fan.

Many years later, I find that I am sick of writing about Team Sky and negative predispositions of teams, nations and riders. Don’t get me wrong, I wish the UCI would gain the upper hand in their battle against doping – but I’m merely a fan.

Wearing an Astana jersey is sportif sacrilege. But why? Because they made a rap video? Because Alexey Lutsenko keeps winning in exciting ways? Because Jakob Fuglsang took the fight to Julian Alaphilippe at Strade Bianche? What about their on-going tributes to the late Michele Scarponi that are some of the most heartfelt in recent history?

The real reason is because Vinokourov and Andrey Kashechkin were caught red handed for homologous transfusions in 2007. Mathias Kessler was suspended the same year. Doctors Pedro Celaya and Luis del Moral were named in an investigative report in 2012. Both Iglinsky brothers were busted for EPO in a high-profile case. Contador’s clenbuterol saga happened whilst he was wearing Kazakh blue. As recent as 2014, riders failed tests in the developmental team. Let’s call their time in existence as… difficult.

There is absolutely no point defending Astana’s sins. Those who deny their underhand activities are blinded beyond hope. However, as fans of pro cycling it is perfectly acceptable to re-frame our support for the team. When I was twelve I wanted to see exciting and daring racing. A large part of me still does. Astana have almost singlehandedly brought the fight to Team Sky over the last five years. AG2R aren’t strong enough. Jumbo are the new boys. And let’s be honest we’ve all given up with Movistar.

Additionally, riders such as Fuglsang, Pello Bilbao and Miguel Angel Lopez shouldn’t bear the weight of the disgust for the likes of Maxim Iglinsky.

If you work for an anti-doping authority, you have plenty of reasons – and an obligation – to keep a close eye on Astana. But as a fan, I have a legitimate reason to support their riders. That’s my choice.

Astana have brought more joy to cycling races than most teams in the last five years. I’d introduce Astana to non-cycling fans the same way I’d introduce my best friend to a potential partner; by focussing on the good bits. You wouldn’t talk about your baggage on the first date. Astana aren’t the most attractive, but they’ll show you a good time. 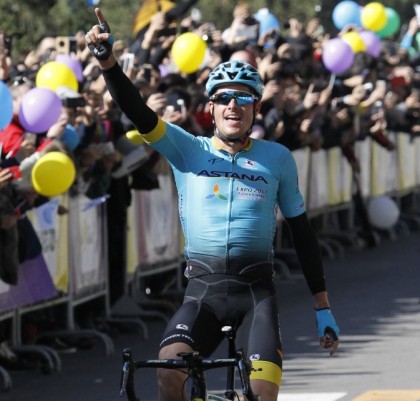