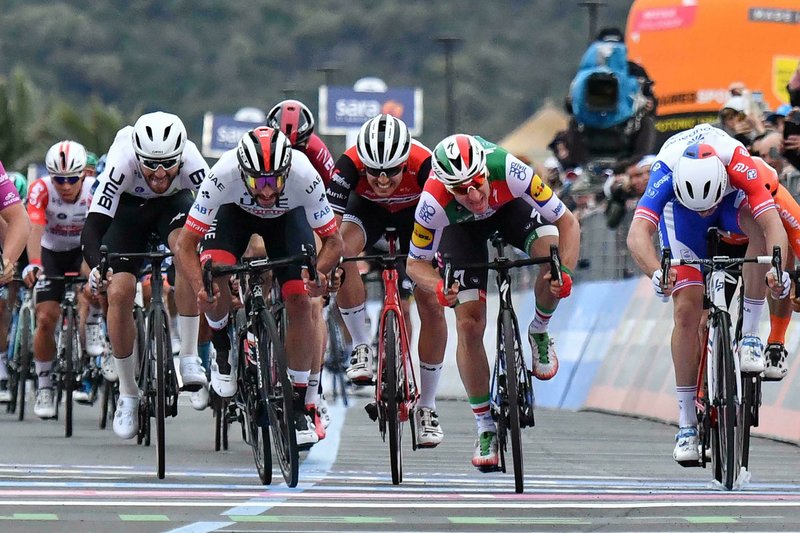 What a break! The writing was on the wall once Pello Bilbao, Davide Formolo and Tony Gallopin got into today’s escape. Matteo Cattaneo also looked strong. UAE upped the tempo and kept Conti in pink but it wasn’t particularly pretty.

Despite three classified climbs at the day’s end, tomorrow’s rolling hills are far more manageable for the sprinters. The Cartoceto is a bit of a wall, but is far too short and far too early to shed the peloton of its big men. The rest of the climbs are far gentler than most official profiles suggest. They’ll be a large peloton together in Pesaro… but will they be fighting for the win?

Ah sh*t, here we go again. Despite frequently championing Elia Viviani as the faster sprinter at the Giro, he look tired the other day and tomorrow’s stage is not easy, especially with the forecast rain. I think he’ll be a better bet for stages 10 & 11. At 7/1, the more robust Demare makes more sense and FDJ have looked highly motivated.

After resisting for two days at short odds, I’m now jumping aboard the Battaglin train. He loves this race and will be desperate to get things going for Katusha. Whilst it’s not the perfect stage for him, I don’t think a big bunch sprint is a foregone conclusion. He’ll need a split in the peloton… is that too much too ask? The stage will be tough in the wet and we won’t see pretty sprint trains.

Cattaneo at 200/1? Yes please. Always. Get in that break and leave them all behind.

I’d love to know what Bora have planned for the mountains. Is Formolo riding GC? Or dreaming for his second Giro stage win?

Not as good as bicycles…