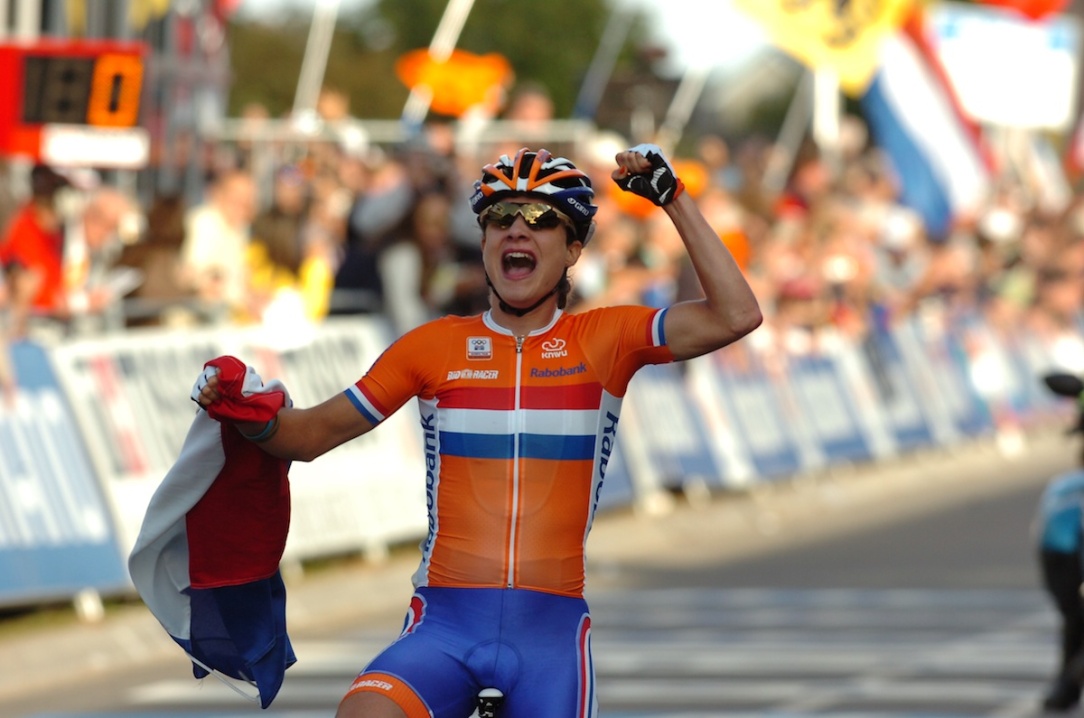 They say a picture speaks a thousand words. I say 500 is a more accurate figure.

Shortly after this photo was captured, the flag-holding, arm-pumping, Marianne Vos admitted that she had forgotten what it felt like to be the world champion. The Dutch superstar had previously snatched a road world title in 2006 at the age of 19, despite eligibility for the junior race. In the five years that followed, Vos amassed a pile of honours and became the most decorated cyclist of this generation. However, during the same period, the world title had eluded her on five occasions.

Remarkably, she had come second in five straight events. In 2007, Stuttgart, she won the sprint behind a solo escapee; the 20-year old Marta Bastianelli. In Varese in 2008 it was Olympic champion Cooke. The following year she was again left to fight for silver behind an Italian – this time Tatiana Guderzo. More heartbreak was dealt from Italy in both 2010 (Geelong) & 2011 (Copenhagen) courtesy of sprinter Giorgia Bronzini.

Perhaps these defeats had given Vos the jitters but she could never be called a choker. She was a multiple national champion, La Fleche winner, Trofeo Binda winner, Ronde van Drenthe winner, and had won every colour jersey at the Giro Rosa. She was also a brilliant cyclo-cross rider and had won four straight world titles at the off-road discipline (a streak which would later extend to six). At the UCI track championships in Manchester in 2008 she won a gold medal in the points race. This would confirm her as one of a kind, becoming the first woman to hold world titles in road, track and cyclo-cross.

Nobody could match Vos’ blend of talents with leading sprint speed on both flat finishes and short hills. She was also remarkably strong and had added long solo attacks to her repertoire. She was the near-perfect rider for undulating World Championship courses. Relative to her ability, one World title was a poor return and a thorn in her side.

Vos started the 2012 season in dominant fashion with three victories by the end of March. To much surprise, she was beaten by Evelyn Stevens at La Fleche after multiple crashes and delays had clearly taken their toll.

However, by July, Vos was in flying form and collected some of her most impressive results. She won five times at the nine-stage Giro Rosa before heading to France to win the Limousin Tour by fourteen minutes. Finally, in August, she became Olympic Champion in London, defeating rival Lizzie Armistead.

The Olympic victory provided a timely confidence boost before the Worlds, held in Valkenburg in the Netherlands. The 129km course featured multiple climbs of the Cauberg and ruled out the possibility of sprinter Bronzini completing a hat-trick.

With two laps to go Vos was trapped in the peloton behind a group that included teammate Anna van der Breggen and American Amber Neben. The favourites grew nervous and Vos knew it was time to make a move. She roared up the Cauberg and soon closed the gap, but brought with her dangerous Italian Elisa Longo Borghini.

Her chances had vastly improved but there was still work to be done. Vos knew she was the strongest on the final ascent of the Cauberg but worked hard on the final lap to zap the group of any remaining hope. When the climb arrived, Vos moved away from her rivals with ease. Her powerful attack contrasted greatly with Rachel Neyen’s grinding response. On the false flat it was clear Vos would be champion. She grabbed a flag and wheeled jubilantly across the line to rapturous home support.

She won again the following year.