Young, fast and Italian. Setting that criteria in a pro cycling database a few years back would have returned a sizeable list (reading something like Modolo, Nizzolo, Andrea Guardini, Elia Viviani, Jakub Mareczko, Andrea Palini, Niccolo Bonifazio, Davide Cimolai, Sonny Colbrelli, Nicola Ruffoni, Daniele Ratto…). The current generation are funny sorts, however, mainly popping up throughout the Asia Tour and hoping for a run out at the Italian-heavy Giro.

This is in part due to there being just one Italian World Tour team in Lampre Merida – and then most years they throw their best resources at the Giro anyway. The team have had a talented selection of sprinters in recent years but, whilst both Bonifazio and Cimolai had performances to savour at last year’s Milan-San Remo, Modolo looks to be the only flat-out fast man to come through their ranks.

Others on the World Tour include Nizzolo (Trek) Viviani (Sky) and Guardini (Astana). There’s also a chance that Mareczko will get a big move from Southeast at the end of this season. Swapping Cannondale for Sky, Viviani seems close to finding his niche on the World Tour sprint scene. Fast and confident, he has championed many a messy sprint as well as besting both Greipel and Cavendish at times last year – all with a mediocre lead out train. Guardini seems equally as fast but happier to float around the second tier as part of Astana’s Italian family. Nevertheless, he claimed three wins over current buzz rider Caleb Ewan last March.

That leaves Nizzolo the 2015 Giro points jersey winner and also somewhat of a non-winner, returning just two victories since January 2014. His best results have actually been at one-day races – Vattenfall, Paris-Bourges – but he always finds at least one or two faster finishers. His tussles with Modolo became a theme of last year’s Giro but he out-sprinted his Lampre rival just once, for fifth place, and lost 0-2 in terms of stage wins.

They’ve recently been clashing at the tours of Dubai and Qatar and they’ll face off again at the Giro in May. Modolo, now 28, is reaching his peak years and Nizzolo, a year and half his junior, is not far behind. The two deserve places on the World Tour, and are showing progression in terms of consistency, but need to find their niche quickly or else get swept aside.

For Modolo the biggest threat would come from being replaced as the fastest man at Lampre. He may, in some ways, be glad to see Bonifazio leave the team as the talented 22 year-old looked good at the start of last year. His new competition comes in the form of Slovenian Marko Kump whom the World Tour knows very little about. He claimed a huge 18 wins last year (albeit in the lesser ranks) begging the question, where has he been?

Luckily Modolo has wins on his side too, dotted around Italy, Turkey, Belgium, Switzerland and China. He holds good pace, perhaps still improving, and recently raced Cavendish to a narrow defeat on the opening stage in Qatar. Modolo may be happy to hunt more Giro wins over the next couple of years and Lampre will be more than happy to accommodate his goals. To change things up might be to attack the Tour de France, where there has been no Italian bunch sprint winner (not counting the stages won by Matteo Trentin) since Alessandro Pettacchi in 2010. That year may not seem too distant but the nation’s sprinting record was exceptional through to the mid-2000s; Pettacchi, Mario Cipollini and even Daniele Bennati – his 2007 often forgotten- making their mark on the race. 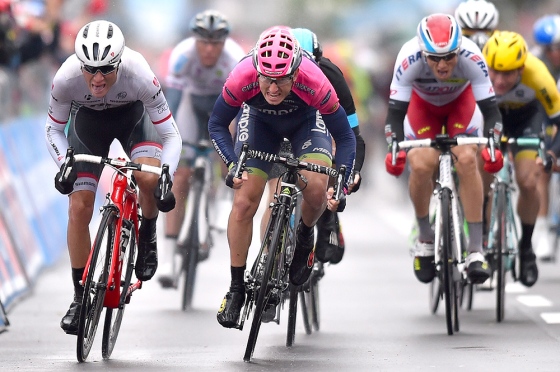 As for Nizzolo, it’s unlikely he will ever pick off wins in the Grand Tours but he can count himself unlucky that the last 24 months haven’t brought a Giro stage. In 2014 he was three times runner up to Nacer Bouhanni which was every bit as frustrating as Peter Sagan’s collection in France but without a win to balance things out. Last year Trek lost most battles against Lampre with Modolo’s stealth-train of Ferrari/Richeze waiting all day before bursting into action inside the last kilometre.

Whilst he is obviously quick enough to challenge on the flat, his next successes may come from his ability to handle climbs. He should never be the first sprinter to get dropped and he even gets mentioned as a candidate for a protected rider in Italy’s Olympic/World Championship squads. He could do worse than to peak in late August, targeting Vattenfall Cyclassics once more and even looking to cause an upset the following week at GP Ouest France – Plouay. For a change of scenery he could then go on to the Vuelta where rolling terrain is a theme and bunch sprints are a little less predictable.

For both Modolo and Nizzolo you can expect little to change this year and they are both expected to head to Italy in May and resume a rivalry they seem to enjoy. Worryingly, Marcel Kittel may join them and is a safe bet to collect what’s on offer. The German doesn’t even seem as fragile as he used to be, stomping up the Hatta Dam recently just a handful of places behind runner-up Nizzolo. They’ll even have to fight for the spotlight with young compatriots Bonifazio and Mareczko. All things considered, the pair are unlikely to have bad seasons but don’t expect to hear their names too often.