On February 6th Marcel Kittel was crowned the winner of the Dubai Tour, pulling things back his way on the final day when sprinting home to victory. His race had mirrored Mark Cavendish’s 2015 win, owing a lot to a show of strength on the Hatta Dam plus stage wins on the first and last days. The Dubai Tour is an hors d’oeuvre for the sprinters and the intensity was turned up at last week’s Tour of Qatar.

The blustery open roads of Qatar rarely see a large peloton finish together. Stage 1 saw most wily sprinters end up in a small front group and Cavendish romped home for his first win of the season. He was stopped in his tracks on Stages 2, 4 & 5 by a resurgent Katusha and their leader Alexander Kristoff. For the second year running the Norwegian came away with three wins and a place on the podium, narrowly missing out on top spot. Cavendish had the better of Wednesday’s time-trial, finishing seventh behind winner Edvald Boasson Hagen, and ended five seconds clear in the GC.

The Arabian trio is completed by the Tour of Oman. Incepted in 2010, the race is the middle brother with Qatar now in its 15th year and Dubai the baby in its fourth. Whilst many who competed in Qatar will head to Oman, the race differs by its inclusion of climbing – or more specifically one climb.

Green Mountain (Jabal Al Jakhdhar) is a pretty impressive spectacle and one of my favourite climbs this side of the Giro. Winning ascent times are often discussed with last year’s effort by Rafael Valls timed quicker than the likes of Chris Froome and Vincenzo Nibali in year’s prior. The landscape of the region is varied and Stage 4 will once again tackle Green Mountain as the only climb of the day – a horrible wake-up call on an otherwise flat day out. 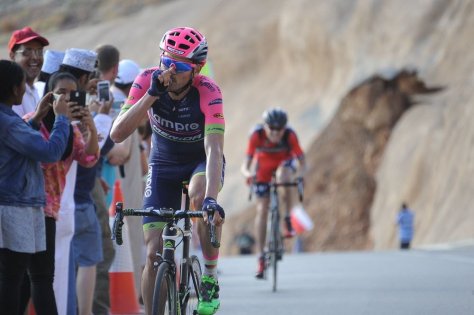 Whilst the race is likely to be decided there, Oman provides enough lumps to cause time gaps throughout the week and there are plenty of reasons for the fast men to pack their bags after Qatar. The inclusion of a ramped finish in Quriyat takes Stage 2 away from the sprinters whilst the rolling hills of Stage 5 have more potential for GC action.

It was this stage last year that caused controversy with riders sheltering under a bridge in protest of poor conditions followed by a neutralized section of riding and eventually an abandoning. Pictures showed a group of pretty disgruntled riders and did nothing for the image of a race already known as a potentially tricky area of the world for cycling. It also allowed Valls to comfortably keep his leader’s jersey and was the main contributor to last year’s race ending a damp squib. With the quality of riders Oman can attract, hopefully 2016 will welcome a return to some highly contested showdowns.

The startlist contains plenty of talent and Green Mountain ensures a climber will be crowned champion. With others heading to Spain, Nibali is the only Grand Tour winner in Oman but doesn’t tend to go well this early in the season. Tom Dumoulin is unlucky not to be a Grand Tour winner and is more likely to go well fresh. His Giant-Alpecin team has been weakened, however, by the terrible training crash in Valencia. Eduardo Sepulveda will carry form to Green Mountain but it’s unlikely his Fortuneo –Vital Concept team can control the race through its various challenges. For riders backed by good teams see Dan Martin (Etixx), Rui Costa (Lampre) and both Romain Bardet and Domenico Pozzovivo (Ag2r). Martin and Costa will be threats all week whilst the Ag2r pair are amongst the strongest climbers. Lastly there is Richie Porte who may very well be the favourite. He has all the tools to win this race but must rediscover his winning mentality of 2015.

Though dependent on his attitude towards the race, Richie Porte should start favourite. The biggest danger is Etixx’s Martin/Brambilla/Jungels trio. Italian Brambilla often goes under the radar and both he and Martin have won this year already. Ag2r pose an interesting threat with Bardet well suited to this race and Pozzovivo having the Tour Down Under in his legs. I’ll back the Italian to cause a shock and go for Pozzovivo – Martin – Porte.

Who could grab a stage?

Greg Van Avermaet could be able to pick a stage off for BMC, whether on one of the flatter stages or by powering home on Stage 2. There should be a sprint on Stage 3 and things will likely be settled between Kristoff, Andrea Guardini, and Sacha Modolo (if he races) in familiar fashion. Dimension Data bring tougher sprinters in Edvald Boasson Hagen and Nathan Haas and both should feature throughout.

Who could spring a surprise?

It will be interesting to see if things splinter on Stage 5 to the Ministry of Tourism. The conditions robbed fans of action last year and riders such as Costa, Dumoulin and even Boasson Hagen could look to profit. I also like the look of Wanty–Groupe Gobert’s team with Italians Simone Antonini, Enrico Gasaparotto and Marco Marcato.