We hadn’t seen anything from Michael Matthews this season – then he won two stages in three days. His prologue win was the more eye-opening of the two, so obviously strong and in form. Milan-San Remo is his first aim for the season but Matthews was yet to appear before the start line in Conflans-Sainte-Honorine. He promptly rode his cobwebs off – if they had ever been any – and was a San Remo favourite just a few days later. A shoulder to shoulder with Nacer Bouhanni handed him his second win and his sprint looks at a good level. Completely skipping the Australian racing season, Matthews proved that with training rides alone you can reach competitive condition.

Geraint Thomas should fear nobody

I’m running out of words to describe race winner Thomas. The Welshman won E3 Harelbeke last year and has just out-climbed Alberto Contador, Richie Porte, Simon Yates, Rui Costa, Romain Bardet and Tom Dumoulin plus about ten other young talents. He had been given a typically strong Team Sky line up – and owes a pint or bidon to Sergio Henao – but this wasn’t even a particularly defensive ride. He was one of the first to follow Contador’s big attack and didn’t look especially troubled. We’re lead to believe Thomas has chosen to pursue stage racing and it’s looking like a fantastic decision. 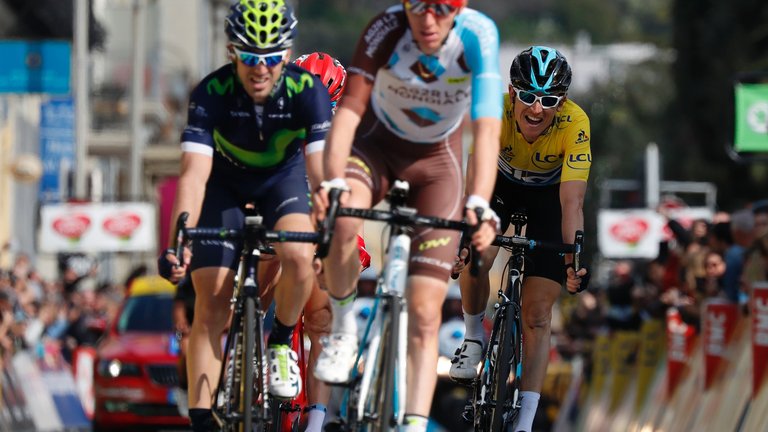 It’s possible that Thomas could have won Paris-Nice without every going toe-to-toe with an Alberto Contador riding in earnest. The Spaniard could have been off the boil on the rolling hills and have treated the mammoth Stage 6 as a training exercise. This was not the case, however, as El Pistoloro was here for the win. Returning to the race he burst on to the scene at in 2007, Contador looked sharp all week never finishing lower than 33rd. He then sent Majka on the attack on the La Madone d’Utelle as a means of setting up his own killer blow. He was left disappointed that day but this set up a fantastic and un-Contador-like move on the final day, utilising lower slopes to attack the race leader. He narrowly missed out but his desire was obvious to all.

Bouhanni is one of the fastest and…

Forget the head shaking, handle bar punching, top 10 finishes of 2015 – Bouhanni is back beating the big name sprinters (okay, they’ll still be occasional handle bar punching). His two victories at last year’s Criterium saw him best mediocre opposition but his Stage 4 win saw him topple Griepel, Kittel, Kristoff, Matthews and old rival Demare. He found sweet redemption after being banished to third the previous day, despite crossing the line first. The two-place docking was fair, leaning heavily into Matthews denying him an inside line, but the Frenchman had been rocking across the road from some distance out and the incident was not as nasty as some would have you believe. On both days he looked seriously quick. Via Roma awaits.

…Cofidis are capable of a good lead out

Swooping to the front of the Peloton on Stage 4, Cofidis resembled a coherent and powerful lead out train. After letting Katusha complete a late breakaway catch, Christophe Laporte lead a trio of Cofidis riders into the closing stages of the race. Just as Lampre had done at last year’s Giro, the French outfit took a risk and ghosted to the head of the race once the hard work had been done. It’s been a long time coming but they got this race right.

After previously suggesting Demare’s future lay in the longer, harder one-day races, he surprised me and popped up with a World Tour bunch sprint win. On a day where the big Germans went missing, Demare was still tasked with beating Matthews, Ben Swift and old foe Bouhanni. We now know Bouhanni was in great shape all week and on the opening stage he was out foxed, and out sprinted, by Demare. The Frenchman showed he is certainly no slouch switching lines and powering round his rivals. Once disgruntled FDJ team-mates, perhaps there is room for both Demare and Bouhanni at the biggest races. To be continued.

Ilnur Zakarin’s approach to bike races is proving to be effective. At 26 years old he has had an underappreciated rise over last 18 months. From relative obscurity at the end of 2014, Zakarin toppled Chris Froome and team-mate Simon Špilak at the Tour of Romandie. He followed that with a Giro stage win and good performances in Poland and Norway. Despite this record, I’m still not really sure where his strengths lie or what he actually does. He has put in some memorable attacks; taking himself to the limit in Sestriere last year holding off a group of Giro favourites before hitting a large an inevitable wall. Nevertheless, Zakarin is a brilliant climber and the GC excitement on Stage 6 took the spotlight away from the Russian’s win. He clung on through Contador’s attacks and was the most powerful rider in the sprint for the line. He finished fourth overall.

Staying with that part of the world, Kazakhstan’s Alexey Lutsenko was an impressive winner of Stage 5. When the break of the day splintered apart following the short descent of Col de Seze, Lutsenko rode on for an unlikely 21 second win. If we believe the TV graphics to be correct, he held a mere half minute advantage with over 3km to go meaning the hungry pack took just three seconds a kilometre from the lone Astana leader. I’m expecting big things.