Five of the best… Paris-Roubaix races

‘The Queen of the Classics’ has the richest of cycling histories. Paris-Roubaix can boast several eras of serious rivalries from Roger De Vlaeminck and Eddie Merckx to Tom Boonen and Fabian Cancellara. It’s a race of attrition where punctures and crashes play a greater role than in any other race on the calendar. Here are five of the best editions of Paris-Roubaix.

There are so many fantastic stories from Paris-Roubaix that restricting the list to five proved quite the challenge. Peter Cossins’ book ‘The Monuments’ detailed some of the quirks of Roubaix races back as far as the the start of the 20th century. Tourmalet conqueror Octave Lapize had things his own way between 1909 and 1911, surprising Louis Trousselier with his ability to sprint when taking his first win. The 1919 edition is notable for the birth of the ‘Hell of the North’ nickname as the route took riders through war-torn northern France. Henri Pelissier took victory in the slowest recorded Roubaix and claimed a second title two years later when leading home his younger brother Francis.

Jumping to 1981, Bernard Hinault ended a baron run of 25 years for the home nation winning in an exciting six rider sprint. More surprising were his views on the race, referring to it disparagingly as ‘cyclocross’ as well as other, more colourful, snubs. It’s a testament to Hinault that he survived his own personal hell to add the race to his Palmares.

In 1983 an exciting race was won by Dutchman Hennie Kuiper. Superstar Francesco Moser set about to eliminate most of the field but could not shake himself free of a group of five. Kupier attacked early to avoid a sprint finish and Moser was unhappy at his companions’ unwillingness to chase. The Dutchman opened up a sizeable gap but still found time to puncture 6km from the finish. Hopping on a new bike, Kuiper was successful in holding off the chasers. Gilbert Duclos-Lassalle, who won the race nine years later, took the sprint for second with Moser settling for third.

With those out the way, here’s my five.

2011 – Vansummeren takes all as Cancellara leaves it late

In amongst an era of victories for the race favourites, Johan Vansummeren upset the odds in a chaotic and crash-marred 2011 edition. After a fast and controlled opening, punctures saw the end of Tom Boonen’s challenge and the peloton significantly dwindled. There were plenty of attacks and outsiders began to sense an opportunity to slip away.

A group broke free and amongst them was talented cobbles rider Vansummeren. Although their lead was less than a minute with 40km to go, the chase was disjointed and Cancellara, Thor Hushovd and Alessandro Ballan had little in the way of support. With each hard cobbled section completed the leaders grew more hopeful of landing a famous win. Cancellara refused to give up, leaping away from the chase group and picking off dropped members of the breakaway. Vansummeren found himself the strongest in the front group and was the lone leader with less than 15km to go. Cancellara continued to rip through the break, riding his way into second place on the road. The gap fell to under 20 seconds but Vansummeren had reached the Velodrome and would hold on to claim the biggest win of his career.

The 1960s saw eight different Roubaix winners but with the turn of the decade a fierce rivalry would take control of the classics. By 1972, Eddie Merckx was already a two time Roubaix champion but 25-year old De Vlaeminck was still on the verge of his greatness.

Terrible weather caused mayhem in the Arenberg forest and a Merckx crash would prevent a showdown between the two Belgians. De Vlaeminck’s pace obliterated the main group but in the latter stages of the race he was tasked with catching Willy Van Malderghem and Alain Santy. They had a lead of almost two minutes but De Vlaeminck set off furiously, catching and passing the duo before riding away for an emphatic win. With only two Monuments to his name at the time, few would have expected him to have such mastery over the cobbles. It was also the year Barry Hoban finished third for Great Britain – the country’s first visit to the Roubaix podium. 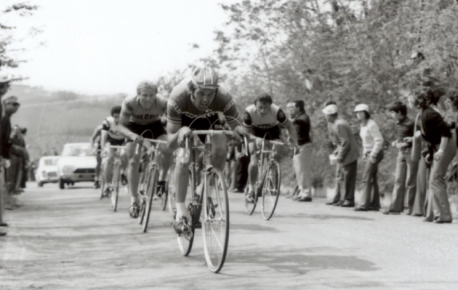 When there’s no superstar crushing the opposition, Paris-Roubaix can produce tight velodrome finishes resembling Olympic track disciplines. This was never clearer than in the 1990 edition known as the closest Roubaix of all time.

Eddy Planckaert was a previous Flanders winner and member of the super strong Panasonic squad. The Belgian attacked with almost 100km to go to the shock of both rivals and teammates. The move worked in his favour as he managed to put distance between himself and his rivals whilst guaranteeing the rest of Panasonic would be ordered to protect his advantage. Greg Lemond led the chase and rode hard to keep Planckaert’s group at a manageable distance. Following Edwig Van Hooydonck, talented Canadian Steve Bauer bridged across to the leaders and the newly formed group headed onwards to Roubaix. Fearing his sprint was inferior, Bauer made an acceleration which only Planckaert and Van Hooydonck would manage to follow. The trio had eyes set on victory and were shocked to see they had been joined by defending champion Jean-Marie Wampers and Martial Gayant as the race entered the velodrome.

The sprint that followed was highly entertaining with Van Hooydonck coming from high up the concrete track to make a daring early move. Bauer was well placed to counter and propelled himself down the inside on the final corner moving into first position. Planckaert looked to have left it too late but showed his sprinting background when dipping down and taking metres out of the lead duo. As the line approached he nudged his bike beyond Bauer’s to take the finest of wins by the finest of margins.

2000 – Museeuw returns for a second success

Johan Museeuw was the most successful rider of the ‘Mapei era’ (apologies to Andrea Tafi and Franco Ballerini). His victory in the year 2000 sits between his masterful 2002 success and Mapei’s controversial podium sweep in 1996. Though the Italian team completed sweeps in 1996, 1998 and 1999 the latter two years saw Ballerini and Tafi take dominant solo wins respectively. In 1996, however, Museeuw, Tafi and Gianluca Bortolami were ordered by Mapei not to contest a sprint and Italian director Giorgio Squinzi chose Belgian Museeuw to be given the win. The decision was unpopular and Museeuw’s win was tainted.

Two years later Museeuw crashed out of the race shattering his kneecap and picking up a gangrene infection which threatened amputation. At this stage his classics career looked over and he may never have achieved his wonderful highs. Thankfully, the Belgian recovered and was racing again the following year.  Mapei once again controlled the race with many attacks being kept at bay. Museeuw went solo with 30km to go and built up a useful lead that began to fall in the closing stages. Tafi – who was not best pleased by the events of 1996 – acted as a super domestique chasing and disrupting counter-attacks.

A memorable moment occurred inside the velodrome which cemented this year on my list; Museeuw unclipped his left leg and pointed to his kneecap later saying ‘Two years ago I almost lost my leg, I have taken a lot of medicine and I have worked enormously’. 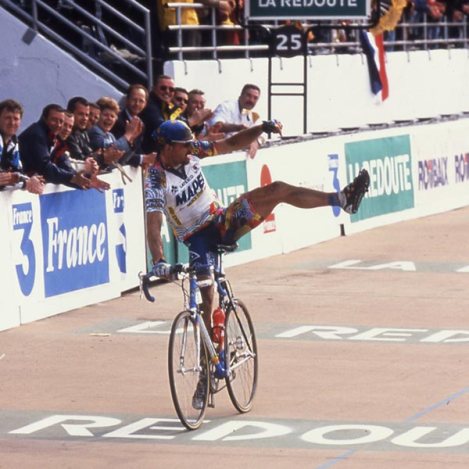 As with De Vlaeminck and Merckx before them, Boonen and Cancellara have only once finished side by side in the Velodrome. The two would instead trade dominant solo wins, my favourite of which came from Boonen in 2012.

After wins in 2006, 2008 and 2009 Boonen was made to wait three years before claiming his fourth. The race itself was dry and sunny and Tornado Tom built an unassailable lead over a talented chase group to earn the most deserved of victory laps in the Roubaix velodrome.

His winning move was initiated over 50km out following a period of several frantic attacks from his rivals. Omega Pharma Quick-Step took control and soon Boonen was away with teammate Niki Terpstra. With Boonen setting a furious pace, Terpstra was unable to stay with his captain and soon the race had a single leader. The Belgian’s lead grew slowly and commentators initially doubted the timing of his attack. Following a tricky few years, Boonen had roared into 2012 and became the first man to win Gent, E3, Ronde and Roubaix in the same season.