Vuelta a España 2016 – What could happen in the final week?

By MikeFranchetti in Previews and Reviews on September 6, 2016September 7, 2016
One comment

After a weekend of ludicrously brilliant racing, yesterday’s Vuelta stage brought the GC showdown to a lull and today’s rest day allows for a longer pause for thought. Tomorrow racing resumes with – surprise, surprise – a summit finish on the Alto Mas de la Costa. You could argue the stage won’t play a role in deciding the classification but, on closer inspection, it’s got all the ingredients for more mayhem. It’s the day after the rest day, there’s a 21% section and the entire top five have reasons to ride hard. The following day won’t feature the GC contenders – a rarity in Spain – and could see the peloton slow to a crawl as they did on Stage 13. The varying intensity of stages has been a theme of the race so far. 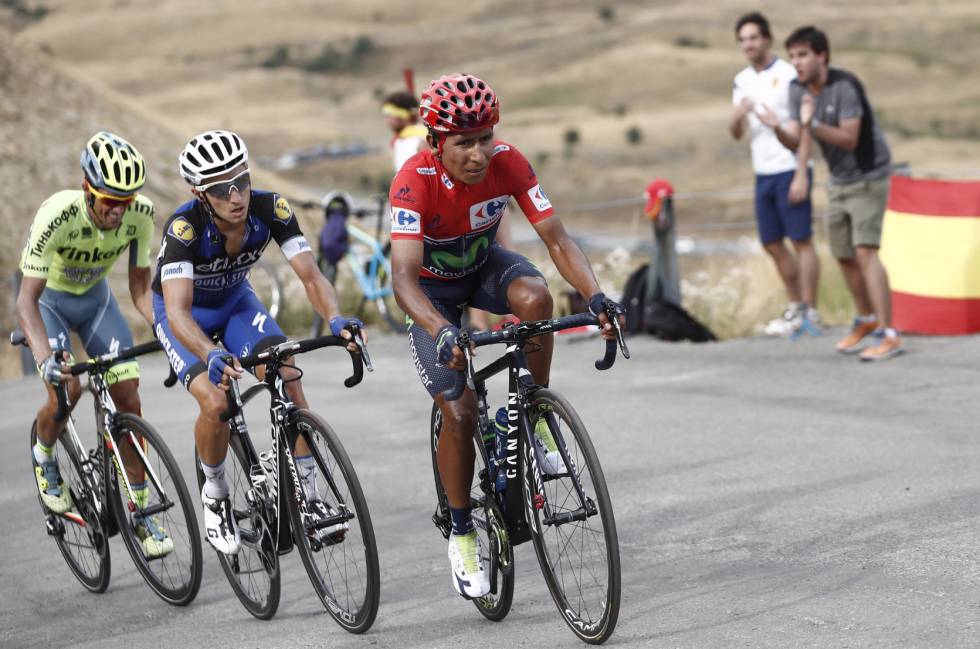 With Friday comes the start of the race’s two-part finale in the form of a 37k individual time trial. The following day sees the race tackle its final summit – the mighty Alto de Aitana. But what state will the top five be in by the time the race reaches that point?

In an interview early last week Nairo Quintana stated he needed three minutes to be safe when the time trial arrived. At that point he had less than one, but seemed to be stretching his dearth of ability against the clock in comparison to Chris Froome. You don’t often seen three minutes between two close favourites. At the Tour this year it was in the first ITT that Froome made headway towards the destruction of Quintana’s spirit. It was a comparable length – 37.5km – and the Colombian had a rough day finishing down in 20th. However, even then Quintana only shipped 2:05 to Froome, and we know who had the greater form in July.

Froome has taken three minutes from Quintana in a Grand Tour time trial – back in his first Tour win in 2013. He put in a typically fine time trial and a young, raw, debuting Quintana lost 3:16. The Colombian was far from a seasoned contender and is a much stronger time triallist now. There can be few comparisons between the rider he was back then and the Movistar leader he is today. We can also note how Alberto Contador seized control of the Giro in 2015 on a monster 54km time trial. Fabio Aru was the loser that day but even he rallied to a deficit of just 2:47.

Whilst Froome is arguably the best time triallist of the current GC riders (holding a pair of Olympic bronze medals), Quintana is far from the worst. At last year’s Vuelta – on a very flat time trial – a weathered Quintana placed seventh just 1:33 behind Tom Dumoulin.

For Froome to take anything close to, or exceeding, three minutes would be a huge achievement. He would need to gain five seconds in every kilometre. Whilst this sounds strangely plausible, Quintana must just stay calm and deliver a performance. He’ll be starting last and doesn’t have to worry about the fear which comes with being chased down.

The excellent Stage 15 saw Sky’s impregnatable defences blown apart and Froome was pushed to exhaustion by an attack in the third kilometre. Despite his obvious difficulties, Froome held a gap of between two and three minutes for the entire second half of the stage. His mishmash of support – primarily Orica and Astana – helped keep his Vuelta dream alive but the Brit himself refused to be beaten. All of his Sky teammates finished the best part of an hour behind Quintana, whilst a motivated Froome lost just 2:40 on the most onerous of rides. Gone is the Froome of July, but there’s still two mountain stages for Sky to strike back. Any gains Froome is able to make on Wednesday will rattle Quintana and make Friday’s time trial a nervier affair.

Contador remains the favourite for the final podium spot due to his knack of producing a killer time trial when needed. Working against him is the collective strength of Orica’s Esteban Chaves and Simon Yates. If Orica could merge the good days of each of their leaders they may find themselves defending the Red jersey. Yates has been superb at times whilst Chaves has shown handfuls of his brilliant Giro form. Contador has been typically aggressive and may yet find himself runner-up to Quintana – who seems to be the only rider able to out-dance him on the slopes. A second place finish would be an honest return for the three-time Vuelta winner.

One other battle to be decided in the final week is between Cannondale leaders Andrew Talansky and Davide Formolo. The young Italian made the cut on Stage 15 and put in a brilliant performance to take seventh. Talansky made ground on the final climb to take 12th on the day and remains one place ahead on the GC. Formolo will need to limit his losses in the time trial and will certainly be one of the day’s losers. Nevertheless, a top ten finish for the Italian will constitute a major success.

So what will happen in the final week?

They’ll be plenty more attacks but I’m expecting Movistar to hold it together on home soil for their first Grand Tour win since May 2014. Quintana is climbing too well right now to be concerned by the time trial.

Froome could still close in somewhat and will have to be kept on a leash on the Mas de la Costa. If the Brit’s legs finally desert him, Contador could sneak in for second – but I just don’t see this happening. Quintana will win, with Froome finishing second in Spain once more.