I confess I was not as excited for Omloop Het Nieuwsblad and Belgium’s curtain-raising classics weekend as the rest of the cycling world. Perhaps I was foolishly distracted by Green Mountain and the Abu Dhabi Tour, intrigued to see if Rui Costa and company could upset the leading GC guys. I’ve had no such distractions on the run-up to Strade Bianche; one of my favourite races on the calendar. The unique Italian race has been promoted to the World Tour and a first rate field will tackle a mix of rolling hills and white gravel roads. Here’s my picks for the race. 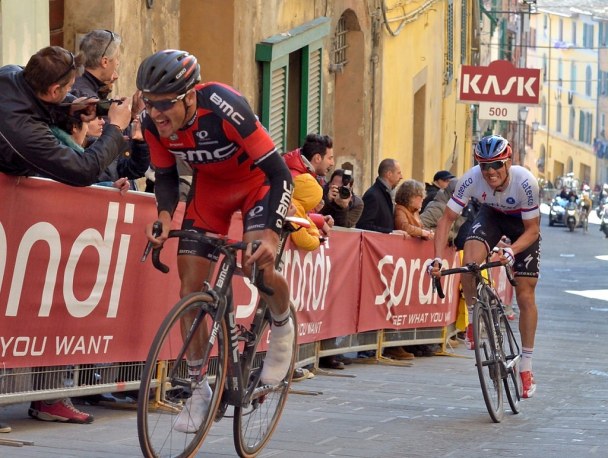 It seems wrong to not mention one of Peter Sagan or Greg Van Avermaet. The two are the reigning World and Olympic champions respectively and are dangerously close to entering a class of their own when it comes to one-day racing. Sagan was a useful fourth in last year’s race and starts bookies’ favourite. Nevertheless, he has struggled to see off Strade Bianche in the last two years; saving his best form for the end of the March. Van Avermaet seems to have no such problem and went close here in 2015 when burning off Alejandro Valverde from the lead trio. We know his climbing has improved and he is the one rider able to out-fox the World Champ.

What a price Bet365 are offering on Fabio Felline. Strade Bianche is a race which asks riders to do a bit of everything and Felline can do it all. Despite not riding the race last year, Felline should feel at ease on these Italian roads and Trek will be hoping for a big performance. Fifth in the time trial in Andalucia and fourth at Omloop put Felline’s form up there with the best in the race. He’s also a winner this season having bested a handy field at Trofeo Laigueglia. Strade Bianche should suit Felline’s talents and I’d love to see him up against the big boys as they enter the Piazza del Campo.

Diego Rosa, Michal Kwiatkowski, Salvatore Puccio, Gianni Moscon…. Sky may be awful at proving the contents of a jiffy bag are innocuous (and looking after laptops in Greece) but they have luxury of talent when it comes to winning bike races. The smart money says Rosa and Kwiatkowski will be protected riders and both have what it takes to win. Whilst the Polish former World Champion continues to rediscover his best form, Rosa has always gone well in Strade Bianche and I’ll be backing him at 16/1. The Italian will probably need to win solo as he lacks the raw power for a group finish. He won Milano-Torino solo in 2015 but there’s no climb in Siena to rival the Superga making his task a little harder. Nevertheless, he’s in form and has what it takes to produce a bit of magic.

Look Out For – Benoot, Nibali and Chad Haga!

Lotto’s Tiesj Benoot didn’t make my final cut but is an interesting rider and an exciting alternative to Tim Wellens. Fourth in KBK last weekend reminded everybody of his ability and he was eighth here last year.

Vincenzo Nibali shows flashes of interest in one day racing and I can’t think of a reason why riding hard on Saturday will interfere with his Giro preparation. He was third in San Remo a few years back but surely Bianche now provides him with a more realistic chance of landing a spring classic? He looks like he could lead Bahrain Merida.

Lastly, I’m hoping to see Chad Haga have some fun purely for this tweet!

I’m so excited to race Strade Bianchi this weekend! In Texas, gravel racing was my Paris-Roubaix. Also, I love Siena.

I am yet to find a price for the American.