It was all relatively calm… and then Peter Sagan went ballistic. If the Slovakian’s attack on the Poggio was eyebrow-raising then Michal Kwiatkowski’s stealthy, slipstreamed sprint on the Via Roma was jaw-dropping. 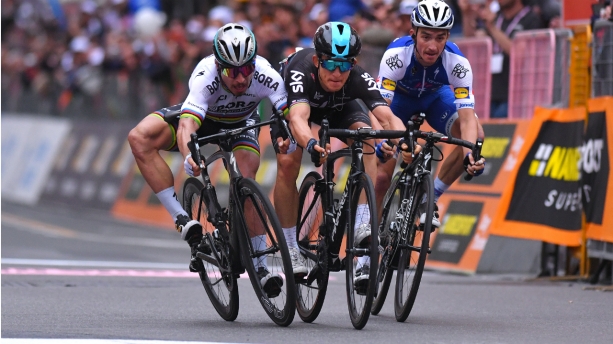 Milan – San Remo is a 290km race that can be reduced – if we’re harsh – to a four kilometre climb and 20 minutes of worthwhile watching. Following a few predictable editions, the first of the race’s two feature climbs – the Cipressa – saw some big names stir cueing Eurosport to remind us of the last time a winning attack was launched there (it was 1996). Tim Wellens and Greg Van Avermaet were to be taken seriously but eventually they were absorbed back into the pack and the race trundled along to the Poggio.

A sizeable peloton remained with plenty of top guys surrounded by plenty of teammates. A nervous buzz would soon ripple through the pack and a fierce battle for position started. The Poggio marks the culmination of many tactical plans and riders would have waited – bored – for 280km to begin their charge for glory.

A blanket of Team Sky jerseys drifted to the front of the bunch and took a stronghold on the race. We’re used to this sight on major Alpine slopes but not the Poggio. A mere bump near the Italian coast, San Remo’s famous launch pad should never be controlled in this way. Amongst the black jerseys surfaced Tom Dumoulin in Sunweb colours; another bizarre sight. At first the big Dutchman seemed to be attacking, then merely acting as a disruptor, and finally settling into a methodical big ring tempo. The opening kilometres appeared to unfold in slow motion but Dumoulin was eating up the ground. Sky could hardly keep his wheel and big Tom existed in a limbo of sorts, floating just ahead of the peloton.

He would eventually swing right as his legs turned to concrete and a few corners later Sagan exploded off the front of the peloton. It was less of an attack and more of a flat out sprint. John Degenkolb reacted well but was found lacking when attempting to match Sagan’s prolonged effort. Kwiatkowski was next to move out of the peloton and was joined by Julian Alaphilippe. The Frenchman put in a shift to close the gap and our winning trio was formed.

In many ways they were the ‘unlikely lads’. Did Sagan have to attack? We knew he was strong enough to follow moves but nobody expected him to be the first man to blow apart the peloton. Kwiatkowski was noted as a contender but an over-performing Elia Viviani had gifted Sky a useful sprint option. Alaphilippe, meanwhile, would have become the first San Remo debutant to take honours since 2009 and was coming from a very tiring Paris-Nice.

Sagan surged onwards covering nearly every inch of the final kilometres as race leader. This much was predictable and the double World Champion is familiar with being forced to ride rivals off his back wheel. The gap to the peloton was healthy and Sagan began peering into the face of Kwiatkowski as he wound up his final sprint. The Pole – perhaps wary of Alaphilippe sitting menacingly in third spot – gave Sagan the smallest of gaps allowing him to launch an ambitious early sprint.

In peak green jersey form, Sagan should really have won by three, four or even five bike lengths. However, he’d gone far too early and we watched (in horror?) as the full effect of his Poggio attack ate quickly into his energy reserves. Kwiatkowski – Sagan’s tormenter at last year’s E3 Harelbeke – drifted back towards him and eventually round his left side. Sagan straightened his bike as he struggled to hold his form but his advantage was soon lost. He lunged at the line but Kwiatkowski had stunned him by a matter of inches. Alaphilippe had also drawn on close terms to create a wonderful overheard photo.

Sagan briefly lost control of his bike and clattered his shoulder into Kwiatkowski. Moments later he turned to check on the San Remo winner and offered warm congratulations in the form of a hand clasp.

Kwiatkowski – the last World Champion before Sagan – has been in terrific form this season adding San Remo to his Strade Bianche win earlier this month. Unlike Sagan, his brilliance is often hidden in clever decision-making. He appears lightweight but can produce fast and clever sprints as showcased in the 2015 Amstel Gold Race. He was once talked up as a Grand Tour contender and whilst that particular bubble has been burst, Sky have nurtured a fantastic all-round performer.

It’s difficult to imagine that a race like San Remo would be conceptualized these days. It’s both heavy on the legs and not particularly challenging. It’s simultaneously remarkably boring and the provider of some of the most exciting racing of the year. Sagan may have been just inches from glory but this year’s race proved once again things never go exactly as we’d expect.