By MikeFranchetti in Opinion, Previews and Reviews on April 4, 2017September 8, 2017
No comments

…which leads me to today’s daily prediction: Philippe Gilbert will not win the 2017 Tour of Flanders.

Well, I got it wrong. There was nothing in Philippe Gilbert’s post-2015 BMC form to suggest he would take to any race – regardless of the surface beneath his wheels – with the command he showed on Sunday afternoon. 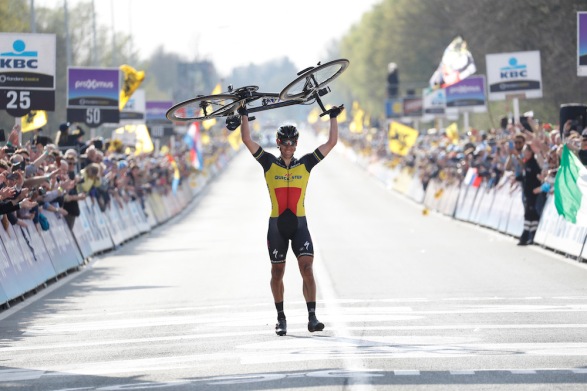 As brilliant as they are, the Muur, Kwaremont, Koppenberg and Paterberg are still just pieces in the wonderful spectacle we call the Tour of Flanders. Though the race is usually won and lost on these famous Hellingen, when Gilbert went solo with 55.5km to go he was committing to a challenge far longer than a cobbled stretch of road. He was detaching himself from his two strong teammates. He was removing himself from games of tactics and patience. He was simply announcing “from this moment onwards, I will not be caught”.

Not being harsh – I loved 2011 Gilbert as much as anybody. But I don’t think he can topple Sagan and the rest

Gilbert returned to Quick Step ahead of the 2017 season. Perhaps this was a sign that the two-time World Champion was about to rediscover his old magic. During his break from Patrick Lefévère results had started to dry up. A second World Championship would arrive in 2012 but he seemed a lesser force in one day classics. He did, however, become a threat in Grand Tour stages pinching doubles at both the Giro and Vuelta. Flanders did not seem a good fit for the rider we saw win in Verbania at the 2015 Giro. A phenomenal solo attack did not seem likely for the rider we saw fade to mediocrity for much of 2016.

If I wasn’t overly impressed with his stint in BMC colours then maybe I should have taken notice when the 34 year-old started the 2017 season brightly. After speaking of his return to cobbles, Gilbert went and took back-to-back second places at Dwars Door Vlaanderen and E3 Harelbeke. A week later he looked great when winning Driedaagse De Panne and had soon shortened to third favourite for Flanders. I still wasn’t a believer. Gilbert was no slouch on cobbled roads but hadn’t seriously attacked Flanders since 2011. It was as if finishing a distant third behind Tom Boonen and Fabian Cancellara in 2010 had helped him realise Wallonia was his true calling. 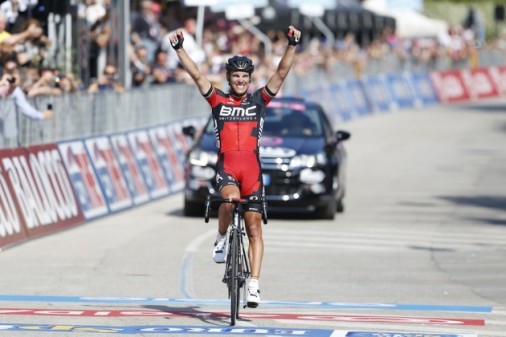 The Flanders field was headed by Greg Van Avermaet and Peter Sagan. The pair – so bold and consistently strong – were a minute behind a group containing three Quick Step riders with 75km to go. They had fallen into trouble on the returning Muur van Geraardsbergen and it looked as though the two had treated the climb as nothing more than a nod to the past.

Their deficit grew steadily at first before edging back towards half a minute. Sagan showed a typical calmness and Quick Step’s gamble looked to be meeting an early end. It was at this moment Gilbert realised his position would never be stronger and launched his brilliant attack.

With a 35 second head start and plenty of riders between them, Gilbert began his 55km race to the finish line against Sagan and Van Avermaet. With no Flanders experience since 2012, he was tasked with the most challenging of solo rides. Sagan made a move and forced a serious group into a hot pursuit including Van Avermaet, Oliver Naesen and Matteo Trentin. They soon caught the brave duo of Dylan Van Baarle and Fabio Felline – the second and third placed riders on the road.

The finale played out in fascinating fashion. Gilbert met the Kruisberg at a champion’s pace and held a 60 second advantage as he tackled the Kwaremont. Behind, a rampant Sagan towed Van Avermaet and Naesen dangerously close to a set of railings, applying just enough pressure to keep Gilbert on edge. And then it happened. The World Champion snagged a fan’s loose jacket, rode into the foot of a barrier and tumbled to the ground with Naesen skidding horribly into the back of him.

Van Avermaet bounced to the ground but remounted fastest; he was the only member of the trio whose race wasn’t over. Sagan – who must take some responsibility for his choice of line – saw his bike snap in half and his sunglasses shatter for good measure.

100/1 shot Van Baarle weaved passed the fallen riders but was soon joined by Van Avermaet and Niki Terpstra. Bloodied, Van Avermaet was still the strongest and Gilbert lost 20 seconds after tackling the Paterberg for the second time. He finally looked zapped by fatigue but I don’t believe he would have been caught in any circumstance; even if Sagan hadn’t taken a tumble. An adrenaline fuelled Van Avermaet might not have had the freedom to pull so hard had he been alongside an ally as dangerous as Sagan.

In the end it was comfortable. Gilbert had produced a phenomenal solo ride which defied race logic. It will be remembered alongside Eddy Merckx in 1969, Johan Museeuw in 1995, Cancellara in 2010 and 2013, and all the other fantastic lone victories. In many ways it was better, braver, and more shocking then the others. Gilbert’s successful reinvention this season has come as a pleasant surprise. He won’t travel to Roubaix this weekend leaving more questions than answers. Will he defend his title in 2018? Will he return to Liege? Will he ever look as cool as he did carrying his bike across the line? 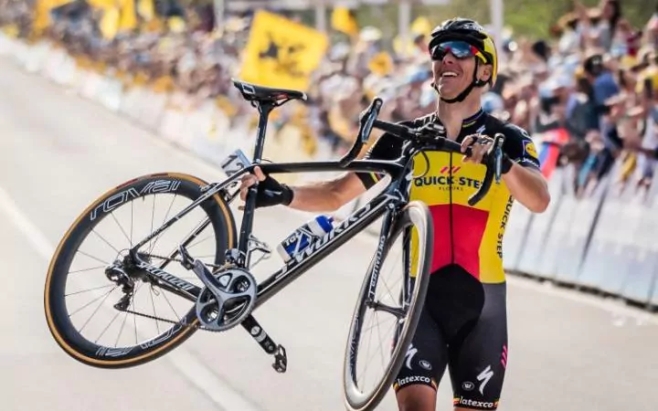