The Queen Stage of this year’s Giro d’Italia produced a whole world of drama. But nothing of the sort we would have imagined. 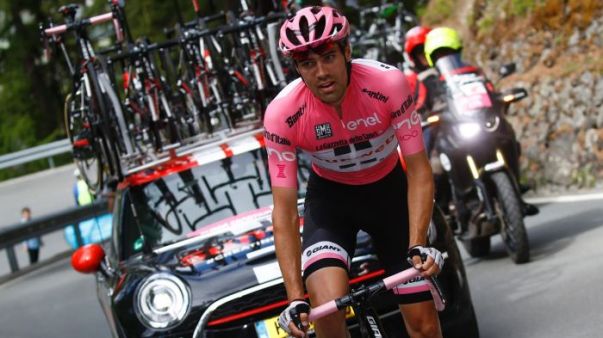 As a Tom Dumoulin super supporter since the moment he rode past Chris Froome on the Alto de Puig Llorenca, I won’t even attempt to hide the massive gloom I felt watching the latter part of today’s stage. The Maglia Rosa stopped quite desperately for a toilet break and wound up two minutes worse off than he was at the start of the day. At first he looked sick and I feared an upset stomach and an eventual abandonment but he recovered to produce a mammoth, lonely, loss-limiting ride.

A knee-jerk reaction on social media has denounced a group of his GC rivals for cheap, under-hand tactics with Sean Yates going as far to say the group should have immediately swung over to a halt at the side of the road.

I’d have been stunned if this had happened. It took me the best part of 5km to process the state Dumoulin was in and I had the luxury of TV cameras, a computer and two jabbering commentators. The riders could not have known what was going on as Dumoulin stripped off at roadside after tailing off the back of the group. Many people have refused to acknowledge the constant radioing Nairo Quintana made. It certainly didn’t look as though the Colombian was saying ‘let’s go’.

Now for the more damning part of today’s events. It didn’t take that long to figure out Dumoulin was back on the bike and pedalling moderately well up the Umbrail Pass. There was certainly a window of opportunity for somebody to instruct the peloton to slow down but the group lacked a leader with the morals/honour/gumption to make the call. None of Domenico Pozzovivo, Thibaut Pinot, Bob Jungels, Adam Yates, Bauke Mollema and even Vincenzo Nibali looked like they wanted to punish Dumoulin in the immediate aftermath, but they were all too cowardly to make the call of fairness. Nobody wanted to be responsible for turning the screw, but they were all happy to let a beneficial situation unfurl.

Many have turned on Quintana as he was the reason for Dumoulin’s call for slow after a crash on Sunday’s stage. To make matters worse for the Colombian, his Movistar team swarmed the front (just as they did after the moto crash) and appeared to show absolutely no remorse. One of the ugliest moments saw a dropped Gorka Izagirre sit annoyingly close to Dumoulin’s wheel with unnecessary insult. Still, Quintana appeared to radio his D.S for more information. He didn’t seem to actively want to be today’s villain.

If anybody is deserving of that title it’s Ilnur Zakarin. The Russian attacked with bizarre timing and was happy to make the most of both Dumoulin’s situation and the bemusement in the GC group. It took me two years to grow to like the Russian and his good work was undone in six seconds.

The GC group may also hide behind the fact that Steven Kruijswijk was out front in the leading group. For a while, last year’s fourth place finisher looked a real threat gaining time in the breakaway. The GC riders will question why they had to stop when Kruijswijk was riding into a cushty two minute advantage. I think any argument based around this point is far too convenient. Allowing Dumoulin back in would not have had a catastrophic impact on Kruijswijk’s advantage.

Unfortunately once the GC group had missed their opportunity to do the right thing there was no going back. Even I resigned myself to the fact that with 5km to go on the Umbrail Pass the die had been cast; Quintana and Nibali were ready to trade blows with lone leader Mikel Landa in their sights. It would have been another ridiculous twist if the GC group had finally slowed to a stop. A cruel situation had developed and no single factor was to blame.

In the end it was a calculated and uncompromising attack by the Shark which really broke poise. Pozzovivo was happy to respond and for the first time we saw Quintana leap out of his saddle. Zakarin crawled his way across and it was clear these four riders were going to deal most pain to Dumoulin.

It’s a shame that it was Nibali – a rider I have always admired – who wound up gaining the most. He delivered a breathtaking masterclass of a descent and made a predatory catch of a defiant Landa. The Italian came across unremorseful in the aftermath but I’m attributing some of that to his complex character. Perhaps I’m giving him the benefit of the doubt based on nothing but blind faith but he seemed to have his eyes fixed firmly on the stage win as he tore down to Bormio. I also enjoyed seeing somebody gain time on Quintana.

So how bad is Dumoulin’s condition? With a little under 30km to go Dumoulin trailed his rivals by 90 seconds and Landa by nearly three minutes. As he grinded through the final ramps there’s no doubt he lost a chunk of time to Nibali and eventually finished 2 minutes 18 in arrears. Nevertheless, the Dutchman took nearly 45 seconds back from the group containing Thibaut Pinot, Bob Jungels and Adam Yates. I’m hoping this is a sign that he still carries good legs. I can’t handle watching him tumble off the podium in the next few days. Today was a hard enough watch.