Five Things Chris Froome Could Do To Become More Popular

We need to talk about Chris Froome. In case you haven’t heard of him (why are you here?) he’s a four time Tour de France champion, Vuelta winner, imperious climber, first-rate time triallist, gracious runner-up, popular teammate, unpopular rival, furious leg spinner, wild elbow dancer, Team Sky poster-boy, chief motor doper, Armstrong Mark II. It’s likely you’ll only agree with a handful of those tags but it can’t be disputed that Froome is not as popular as one would expect. He comes across as a good guy, yet can’t escape the permanent cloud of suspicion that looms over Team Sky. Even ignoring the wild and not-so-wild doping cries, Froome hasn’t managed to endear himself to the cycling purists. But there’s still time! And here’s how…

Despite claiming that climbs such as Spain’s Peña Cabarga are his favourite, images of Froome in the yellow jersey will last longest in our memory. Froome’s Tour-centric approach can be felt during his sometimes sluggish early season and he’s never had any time for the Classics.

One of the reasons Vincenzo Nibali is lauded by some as this generation’s great is the fact he can boast four Grand Tour victories alongside two Il Lombardias, two national titles and a trip to the podium at both Milan–San Remo and Liege-Bastogne-Liege. Froome’s quirky antics at the recent Grand Tours – a daring descent of Peyresoude, the sprint to second behind Sagan in Montpellier, a reckless charge up the Xorret de Cati – suggest there’s far more to the Brit than just grinding up the Alps in the wheel of his teammates. He’s so far had a handful of forgettable rides in Liege but he’s surely sufficiently equipped to mount a challenge. He’d almost certainly get blitzed by the likes of Alejandro Valverde and Julian Alaphilippe round the final corner of cycling’s oldest Monument but this just means he’d have to attack early – something we haven’t seen for years!

*Or Wout Poels. Or Diego Rosa. Or maybe even Egan Bernal. Despite being highly successful, Sky has earnt a reputation as a team you don’t want your favourite rider to join. This is strange when you consider that Team Megabucks-Laboratory has a first-rate set-up and should be able to provide a land of opportunity. Unfortunately, they have a knack of taking any glimpse of race winning potential and creating another carriage for Froome’s mountain train.

In fairness, the likes of Poels and Michal Kwiatkowski have excelled in recent one day races but Froome’s lofty ambitions have hoovered up all of the best GC opportunities. Froome seems popular enough within his own team but wouldn’t it be great to see him tow Thomas up a Giro summit or pace Bernal through the Queen Stage of the Vuelta?

Get A Better Nickname

In one corner we have ‘El Pistolero’, a nickname that conjures the image of a gunslinger riding into town causing shock and awe through whispers of an explosive reputation. In the other corner there’s ‘Froomey’, a nickname you might mistake for a pet hamster. I’ve also heard ‘Froome-dog’ banded about; a nickname suitable for your mate who enters the pub fashionably late shouting ‘the big dog’s here’ before playing an awful trick shot on the pool table.

In a world of Supermans, Captain Americas and Panzerwagens, Froome’s nicknames come up disappointingly short. This year’s double Grand Tour winner needs something cool, catchy and suited to his personality. Whilst some of you will happily see him adopt the nickname Dick Dastardly, I’m thinking The Knight of Nairobi, Crazy Legs or – in honour of his questionable descending – El Loco.

A controversial one now because a whole host of us would like our Giro d’Italias to remain absolutely Froomeless. Furthermore, after making enemies with most of France and a good chunk of Spain, Froome could do well to avoid treading on the toes of the fiery Italians.

Froome’s absence from the Giro stretches back to 2010 when he was kicked out for holding onto a motorbike (he later admitted he had already decided to quit at the top of the Mortirolo). Whilst it’s no coincidence that the Giro has provided the best racing of the year each time Froome has won the Tour, we need to see this generation’s dominant force tackle Italy’s most famous bike race. An attempt at May’s big race would shake up the calendar and potentially free up the Tour de France for a new winner. 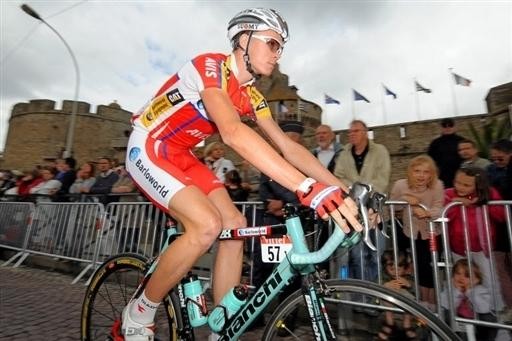 Froome’s detractors can be split into two camps; those who dislike him but still like Team Sky, and those who dislike Froome because of Team Sky. There are plenty who’ll dispute any praise for Froome but happily cheer Luke Rowe in Flanders or secretly praise Sergio Henao. However, I get the feeling a whole host of anti-Froomers have built their hate around a lingering resentment to Sky. The British team have only been around since 2010 but have built an empire on a healthy appetite of annoying mantras, cagey interviews and straightforward Grand Tour victories. And, oh, mountain trains. So many mountain trains.

Ask yourself; would you get behind Froome if he was racing against Team Sky for, say, Cannondale? Would you cheer an exhausted Froome as he recklessly attacked the monotonous gameplan of his former teammates? I’d certainly get behind him if he was dropped outside of his comfort zone or forced to play the underdog. At the very least, it would be of interest to see how he fared without his superb support.