Winners of the 2017 Pro Cycling Season

Let’s celebrate this season’s winners. First, a recap of the rules: there are no spaces for superstars such as Peter Sagan, Greg Van Avermaet and Chris Froome. This is a list for riders who did the unexpected or smashed their way to the top of the sport. 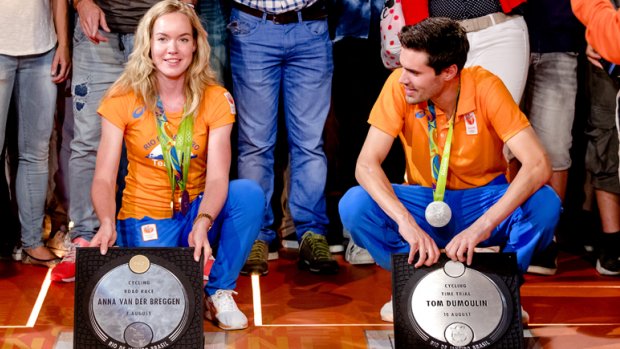 I’ll start by very obviously cheating and choosing a whole nation. It’s been a great year for the Dutch with the likes of Dylan Groenewegen and Wilco Kelderman transitioning towards the top of the sport and Tom Dumoulin announcing himself as a Dolomite-smashing superstar. Some pressure’s been taken off Bauke Mollema, who seems to be enjoying his role at Trek and collected a fine stage victory at the Tour. The nation has come a long way since finishing the 2012 season without a Grand Tour stage win or even GC top twenty.

The Dutch women underlined their strength with Anna van de Breggen and Annemiek van Vleuten following up last year’s good work with brilliant seasons. Van der Breggen proved she had the better of teammate Lizzie Deignan with a hat trick of Ardennes victories whilst van Vleuten’s defining moment came when she flew up the Col d’Izoard at July’s ‘revamped’ La Course. Both were left empty handed in their pursuit of World Championship gold; that particular honour went to compatriot Chantal Blaak.

Prediction for 2018: The Tour de France route doesn’t looked great for Dumoulin but the Dutch victories should continue. Van de Breggen is likely to dominate the women’s circuit for another twelve months.

I was pretty disappointed by rockstar Rigoberto’s cautious approach to the final few Tour de France stages but – in hindsight – you can understand why. The Colombian was kicked to the curb of three-week racing after two seasons of failing to deliver at the highest level and on the highest climbs. He had become the master of getting dropped early and rolling in with the mid-division. Even his biggest fans were struggling to spot his famous mane of hair doing anything particularly impressive. Everything changed this July as Uran coasted through the first week of the Tour before rising to an impressive second place and finishing just 54 seconds behind Chris Froome.

There had been little to suggest he was about to produce this sort of performance – fourth up the Terminillo in March was perhaps the only inkling – and an expected plummet down the general classification never arrived. His confidence has obviously returned and a glance at Twitter on the day of his wonderful one-gear stage victory in Chambery tells you just how big his fan club is.

Prediction for 2018: There remains a nagging voice that says Uran overachieved on this year’s favourable Tour de France route. Will he get near a Grand Tour podium again? Staying at the new-look Cannondale only complicates matters.

Gaviria’s rise to superstardom can be traced through a few defining moments. In 2015 he defeated Mark Cavendish in San Luis whilst riding for Colombia. Fourteen months later he bested Caleb Ewan – amongst others – for his first World Tour win at Tirreno-Adriatico. This May he marked his place among the elite by demolishing his rivals on four occasions at the Giro d’Italia.

There were plenty of victories later in the season but it was in Italy where we all stopped and noted just how good he had become. He looks to have reached a level currently beyond fellow new-gen fastmen Ewan and Groenewegen. He may, in fact, be the second fastest sprinter on the circuit behind departing teammate Marcel Kittel. Let the games begin.

Prediction for 2018: Wins. Lots of them. Gaviria to out-score Kittel in their head-to-heads.

What did you think of Dylan Teuns 12 months ago? His breakthrough season in 2014 was packed full of promise but the following two were more solid than spectacular. He passed a major test at La Fleche this year when bounding up the Mur de Huy in pursuit of Alejandro Valverde and snatching third from a very elite group. Teuns was curiously quiet when completing his second Grand Tour in May but was suitably refreshed by July and that’s when the ‘Summer of Teuns’ began.

He comfortably dispatched the opposition at the Tour of Wallonie before defeating Peter Sagan, Rafal Majka and Wout Poels at the Tour of Pologne. He won well on Stage 3 but perhaps his best ride came when following Poels on the far hillier Stage 7. Not yet satisfied, Teuns mopped up the Arctic Race of Norway in August to complete three back-to-back GC wins. He called time on his successful season in late September; a well-deserved rest.

Prediction for 2018: The Ardennes are calling and Teuns is ready. I wouldn’t be surprised if he added a Liege-Bastogne-Liege podium to his 2nd place in the junior race.

I’ve always had a soft spot for Matteo Trentin and remember fondly how he edged out Peter Sagan for a surprise stage win at 2014 Tour. In the last few years he has mastered the art of stealthily creating opportunities for himself in a very busy Quick-Step roster. Perhaps it was his unique skill set – fast, good on cobbles and capable of delivering from a break – that kept him afloat in the most packed squad on the World Tour. Nevertheless, Trentin had not previously shown the dominant form we saw in the second half of this season.

He arrived at the Vuelta as a possible stage winner with an outside chance of winning the points jersey. Three weeks later he was grabbing his fourth stage in dominant fashion; cruelly missing the points jersey by a mere two points. It had been a Vuelta to remember with victories coming from both big bunch sprints and messy breakaways. He looked seriously quick and it was no surprise when he won both the Primus Classic and Paris-Tours later that month. Sandwiched between those two results was a fourth place at the World Championships where he had quickly become Italy’s most likely victor. He’ll be ditching Quick-Step for Orica in 2018.

Prediction for 2018: Trentin should find plenty of opportunities at Orica. I expect him to ride the cobbled classics and share sprint duties with Ewan.

The losers are here!