Team of the Decade

The 2010s are over and we’ve been made well aware of the hungry twenty-somethings ready to devour every race for the next ten years. The end of the decade felt timely with a number of big-name riders misfiring over the last few years or, in some cases, coming up short in fascinating cross-generational duals. 2019 was a year of surprise winners and a serious emergence of talent. Let’s take a breather to celebrate the riders of the past decade. Here’s my selection. Tour rules apply – only eight riders per team! Tell me what I’ve got wrong...

The Shark freewheeled into this selection courtesy of his vast array of successes over the past ten seasons. He’s helped somewhat by his glorious career spanning almost exactly the decade’s length. At the end of his Trek contract (expiring 2021) he may sadly disappear into the sunset; a fate that neither I nor most of the cycling world will be ready for. He emerged in 2009 before making a huge breakthrough when podiuming at the 2010 Giro d’Italia whilst at the aid of Ivan Basso. His highlights don’t need listing (but for the sake of enforcing the point, see three Monument wins and victory at each Grand Tour) and there’s something beyond the numbers which marks Nibali out from the crowd. At the start of each season the Italian could roll a dice to decide between several different objectives and be considered a serious contender for whatever was chosen. To steal a phrase from American ball-sports, the man from Messina is remarkably “clutch”, never failing to entertain on the big stage.

The second (and equally as obvious) selection for this “team” is Philippe Gilbert; a rider who can boast even more versatility than Nibali. Just a handful of riders happily make the switch between the Ardennes and the cobbles, and even less do it with any degree of success. Then there’s Gilbert who – in the space of seven years – abandoned his cobbles promise to become the best Ardennes rider in the world, only to return, re-focus, and win Ronde with a devastating 50km attack (which I’m happy to dub “solo attack of the decade”). A few weeks later he bounced over the Cauberg to win in Limburg for the fourth time. This year, at the age of 36, he added little old Paris-Roubaix to his collection. Never has flip-flopping between specialities looked so beautiful. No need to even mention the seven Vuelta stages. The former World Champion is one-of-a-kind. 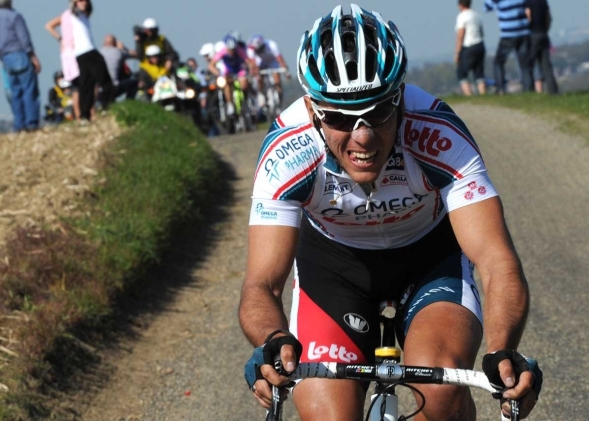 Peter Sagan has dominated the green jersey competition in the 2010s. He has only been prevented from a full set of ten by his tender age (19) at the turn of the last decade. Since debuting at the Tour in 2012, Sagan has won a whopping seven straight greens and remains undefeated. Staggeringly this isn’t his greatest boast, with that honour going to his hat-trick of World Championship wins from Richmond (2015), through Doha (2016), to Bergen (2017). Despite his dizzying race statistics, Sagan has undoubtedly been robbed of even more victories by the giant target on his back. Soon after his meteoric rise, Sagan developed the sort of reputation which led to rival management changing tactics and fellow pros refusing to cooperate. Likewise, organizers would appear to design routes and points systems to drag success away from Sagan. The Slovakian has often been frustrated by these seemingly anti-Sagan measures but, ultimately, it’s the highest compliment available. Sagan changed the landscape of pro cycling.

Selection is difficult when it comes to pure sprinters and a dismal end to the decade for Cavendish almost removed him from contention. It’s therefore testament to his roaring success during his prime that – after wrestling with the idea of several Germans – I decided that Cavendish deserves this spot as the past decade’s leading sprinter. Whilst Andre Greipel champions the Brit for consistency, at the peak of his powers HTC-mould Cavendish was a never-before-seen animal. Positioned by his superb lead-out train, the Brit collected Tour de France stage victories like I collect Giro d’Italia Panini stickers. He peaked at the 2010 Tour but underlined his claim to the throne with four more stage wins on the most wonderful of redemption waves in 2016. A sprinter’s time at the top can be brief but Cavendish’s efforts for over half the decade were a joy to experience.

Another HTC graduate, Tony Martin deserves a place on this team for much more than his goal medal collection at the World Championship time-trial. He’s a remarkably prolific non-climber/non-sprinter, helping himself to a handful of GC victories and two Tour de France road stages to go alongside his many ITT successes. He wasn’t so much handed the torch by Fabian Cancellara in 2011 but rather snatched it with both hands before romping to the first of a comfortable hat-trick of World titles. He added a fourth win in 2016 to tie the record. He did, admittedly, dip as part of a free-falling Katusha squad in 2017 but has found a wonderful new home at Jumbo. He’s the engine of the decade and a superb teammate to call upon. He dragged a stage-hunting Julian Alaphilippe away on a wonderfully doomed two-man voyage at the 2016 Tour cementing his place in our hearts. Who wouldn’t want to ride alongside Tony Martin? He’s the sort of rider who would loop back on a roundabout during a Sunday club ride to pace you back to the main group. And then probably attack.

If you Google “Chris Froome” and skip past the strange interviews, peculiar photos and hundreds of conspiracy theories (Froome uses a motor, Froome was made in a lab, Froome has a twin whom he alternates stages with, Froome is working for the Kenyan government and is positioned in the UK to sabotage the Brexit deal) you might find the odd article about his four Tour de France victories, which puts him just one away from the five-star club. Sadly, there’s more than just Reddit forums dirtying Froome’s name, with suspicious activity at Team Sky culminating with Froome’s high Salbutamol value at the Vuelta Espana. The Froome soap opera is far from over and his legacy will be attacked well into the next decade. However, there can be no doubting that Froome – wearing Sky’s black or famous yellow – was top of the GC pile in the 2010s. Froome vs. the world was a constant narrative in the mid-2010s. It was often boring but sometimes fleetingly exciting. His mind-boggling attack to win the Giro d’Italia would – in other circumstances – go down as one of the best of all time. Roll on #Froome2020 for the next chapter of inevitable drama.

Asking fans to choose between the swashbuckling, time-trial stomping, Sanremo-winning 00s Fabian Cancellara and the classy, all-conquering, peloton-Godfather 2010s Fabian Cancellara is grossly unfair. The peak of Cancellara’s career hinged around the 2010 decade change and “Spartacus” hasn’t even played a part in pro cycling since retiring in 2016. Whilst twenty-something Cancellara may remain the more iconic, it was after turning thirty that he collected most Monuments. 2013 was the year that everything Cancellara had learnt from his duals with Tom Boonen manifested into a glorious – and gloriously easy – Ronde/Roubaix double. You might not think of Cancellara as a rider who took pro cycling to the doorstep of the 2020s, but at the start of the decade he was the man to fear in April. And, more often than not, he delivered. 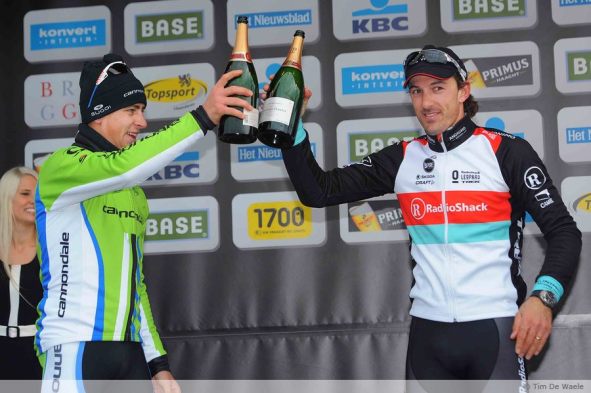 Greg Van Avermaet – The Plan B

Every superhero needs a nemesis and Sagan found a couple in the mid-2010s. Whilst Michal Kwiatkowski proved to be a kryptonite of sorts, it’s Greg van Avermaet who played the long-game to finally reach an equal footing with the Slovakian. Whilst the absence of a sprint removes “GVA” from green jersey contention, he has come out on top of many of their head-to-head battles. If Sagan’s rise to the top was meteoric, Van Avermaet’s could be described as stealthy and workmanlike. Van Avermaet has finished in the top ten of Ronde in his last seven completed participations, cementing himself as a headline entry. In 2017, the Belgian swapped his regular hustle for an explosion of magic, winning Omloop, E3 and Gent-Wevelgem before landing Paris-Roubaix (he finished second at Ronde to the runaway Gilbert). Critics will say Van Avermaet will look back on a career of nearly-moments, but the current Olympic champion has done a fine job of waging war against both Sagan and Quick-Step every April. 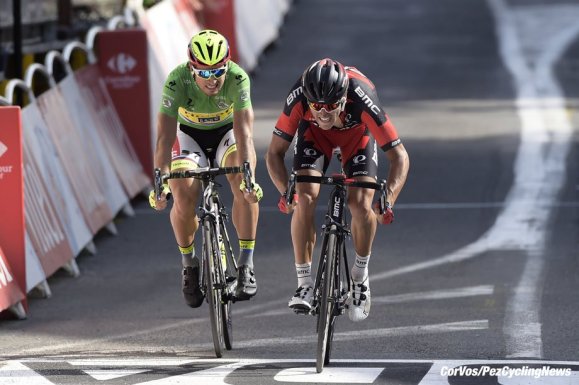 Thirty-two year-old Alexander Kristoff knows how to win races. At the tail-end of the decade he has had to settle for bunch sprint top tens but showed more than a fast kick to land the Champs Elysees in 2018. He’s a rare breed of sprinter who can boast one-day wins at Gent-Wevelgem, Vattenfall, Plouay, Sanremo and Flanders. He’s put plenty of work in this decade and will contest his usual spread of races again next year. Alejandro Valverde will be a glaring omission for some, after the Spaniard continued his stupidly good career well into the decade, completing a second Ardennes double in 2017. Perhaps only personal preference – and the fact I’ve been looking at his face since 2003 – keeps Valverde out of the team. Lastly, spare a thought for my favourite 2010s slugger Bauke Mollema. The Dutchman is an incredibly consistent Grand Tour rider if a little on the boring side. It’s a shame he has never landed on the Tour podium, throwing away his 2nd place on Mont Blanc in 2016. Outside of the Grand Tours he is an altogether different beast and has delivered some daring rides at San Sebastian and this year crossed the line first at Il Lombardia. He also has very little ego… which would be a welcome addition on this team of world-beaters.

1 comments on “Team of the Decade”